Seven influential Sydney rugby clubs are the driving force behind an controversial participation agreement for 2022 that one president believes is “designed to eliminate” three Shute Shield teams in Western Sydney, including one formed in 1879.

The biggest shake-up of Sydney club rugby in decades could be on the horizon after club presidents were sent a draft agreement by the Sydney Rugby Union for next season’s premier competition that has left struggling teams Penrith, Western Sydney Two Blues and West Harbour facing the prospect of extinction or amalgamation. 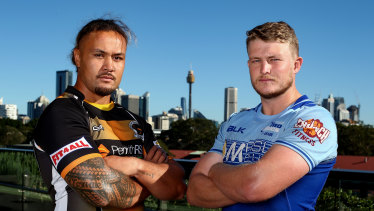 Andrew Fiagatusa of Penrith and Riley Jacobson of Two Blues pose during the 2021 Shute Shield launch.Credit:Getty

The Herald can reveal representatives from seven clubs – Eastern Suburbs, Eastwood, Manly, Gordon, Northern Suburbs, Sydney University and Randwick – have been meeting separately to discuss ways to improve the standard of the Shute Shield and lower grades.

The clubs have been putting pressure on the SRU to put more stringent guidelines in place given the lopsided scorelines in the top competitions.

The Herald has obtained a copy of the document sent to club presidents on behalf of the SRU, whose president Phil Parsons and general manager Peter Watkins declined to comment on Thursday.

Draft terms, agreed to by a SRU sub-committee, include that all clubs need a minimum of four grade teams and three colts sides, plus a women’s XVs team by no later than 2023.

Clubs will need to demonstrate annual revenue of more than $550,000, hire a head coach with the equivalent of World Rugby level three accreditation, while employing a general manager and match-day doctor.

A three-year strategic plan, 40 weeks of training per year and individual performance plans need to be produced as well.

For teams like the Two Blues and Penrith, who are struggling to field multiple teams, the exhaustive requirements mean they will have no option but to fold.

A proposal to split the Shute Shield into two tiers was rejected last year.

However, all 13 club presidents will meet on Monday evening to discuss the proposed participation agreement, which is expected to be given the green light by the seven influential clubs given they hold a majority.

A civil war in Sydney club rugby could break out over the developments, should NSW Rugby or Rugby Australia not intervene, leaving the possibility of the Shute Shield being reduced to a nine- or 10-team competition. The Hunter Wildfires could relocate back to Newcastle.

The SRU and others are frustrated because some weaker clubs haven’t been providing full allotments of grade and colts teams.

The SRU wants the Shute Shield to be “the number one club competition in the southern hemisphere”. In doing so, proud clubs could go under.

“It’s onerous,” Penrith president Gary McColl told the Herald. “If seven clubs have got power and if they have come up with this draft participation agreement, well it’s designed to eliminate us.

“Surely they must see benefit out of the underdog getting some success rather than trying to develop elitism.

“If clubs disappear all these kids will go to league. It’s easy for the strong clubs … but there is no provision to help developing clubs. We’re doing our darndest to build it up.”

Two Blues president Brian Blacklock said was “surprised by the severity” of the document, particularly around four grades and three colts sides being mandatory.

He said without third party support rugby would be on its knees in the west.

“We are not in a position to meet the criteria on a number of levels, so it’s inevitable we will be excluded from 2022,” Blacklock said. “If they have an alternative plan, we’re yet to see it.

“The seven clubs would have to have a change of heart. It doesn’t matter what the remaining five or six say. If they want that model, it’ll get up.

“While they think they’re going to have a tidy competition amongst themselves, it’s going to ultimately hurt the game.

“I feel desperately sorry for the past players of the clubs and those supporters who have stuck with us. It’s sad that a club that was founded in 1879 has been put into a position where we’re unable to participate.

“It’s really bloody sad. It’s kept me awake on many nights. It’s actually affected my mental health as well as my physical health.

“This might be the catalyst for someone to tip some money into it and fix this up. I’m yet to have the conversation with the mayor of Cumberland who has spent over $13 million on a brand new facility for us that we may never play in.”

The Herald contacted representatives from each of the seven clubs on Thursday and a number insisted – on and off the record – every effort had gone to helping clubs out west and this wasn’t a ploy to kill rugby in the west.

“No one wants to see clubs fall over,” Randwick president John Tuxworth said. “What this about is all of us wanting a strong competition and at the moment we don’t have that. I’ve been in contact with my colleagues in western Sydney and we’ve offered our assistance.”

Easts president John Murray said: “What we are doing as a group in western Sydney clearly is not working. It’s a shared responsibility amongst all Shute Shield clubs and to keep going along the same path doesn’t make any sense given we have proven it doesn’t work”.

Eastwood president Rob Cusack said: “There is no doubt a need to tighten up the criteria to ensure that we have a meaningful and contested competition. In our view, there is equally a need to focus on a properly planned and executed strategy for the future of premier rugby in Sydney”.

There has been speculation of a merger but no formal discussions have taken place between Penrith, Western Sydney and West Harbour. However, some club presidents privately believe this is the only solution.

“I’ve only been president for a couple of years but we haven’t received any assistance in any way shape or form from the NSW Rugby Union or Rugby Australia,” McColl said.

“We just want to have a club for aspirational players. Joseph Suaalii grew up at Glenmore Park and played for Penrith RSL juniors in rugby union before he went to The King’s School.”