Hawthorn defender James Sicily looks likely to be forced to the sidelines for the next 12 months with an ACL injury.

He will wait until the team gets to Adelaide on Tuesday before undergoing scans on his right knee. But even if he gets a break and it’s found that he has a medial injury, it will end his 2020 season. 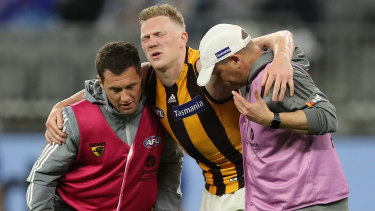 Crocked: James Sicily is assisted from the field during Hawthorn’s loss to West Coast at Optus Stadium in Perth.Credit:Getty Images

Sicily’s knee was caught in an awkward position when he clashed with West Coast defender Tom Barrass in a one-on-one battle for a ground ball with just two minutes to go in the Eagles 32-point win at Optus Stadium on Sunday.

He went straight to ground and looked in serious pain when he tried to get up.

Coach Alastair Clarkson said he wanted to wait for results of the scan before commenting on the plans moving forward. But he admitted it didn’t look good for the 25-year-old.

“We’re uncertain at this stage. He has an unstable knee, so that’s not a good sign,” he said. 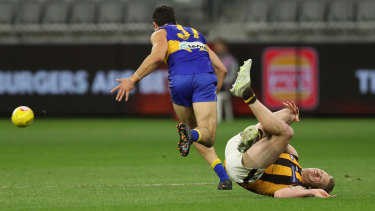 The Hawks defender clutches his knee after going down in a contest against West Coast’s Tom Barrass.Credit:Getty Images

“The mechanism didn’t look great, although damage can’t be confirmed until he's had a scan. But it’s looking an uncomfortable position for us and Sic, so that’s unfortunate.

“These things happen in footy. If it’s a period of time out of the game, we’ll have to deal with that. And get yourself back when you can. But whatever happens, he’ll miss a period of time.”

The Hawks remain uncertain also as to whether Isaac Smith will play against Port Adelaide at Adelaide Oval on Saturday.

The veteran didn’t play in the loss to the Eagles due to a shoulder injury he received against Fremantle last Monday night.

“There is a lot of bleeding in the shoulder joint,” Clarkson said. “We just have to wait for that to settle. Once it does, he’ll be right to play.

“There is no significant damage there. We just have to wait for the blood to get out of his shoulder. Sometimes it can turn really quickly and sometimes it can take some time.”

The game against the Power is the first of three games the Hawks will play while living in their new Barossa Valley hub.

They will also meet Essendon and Adelaide. They then play St Kilda to round off a condensed scheduled where they will play four games in 16 days.

Clarkson said they will continue to play the freshest team they can.

“We've got a compressed part of the season coming up with three five-day breaks on the bounce,” he said.

“So that's going to present some challenges to us as a coaching staff and conditioning staff in terms of how we manage that.

“We're excited by that. When you're on the road like this we'd rather be playing games in a quick space of time.

“We'll continue to play some of our younger players and see how they're going. Particularly if by circumstance we have to because some of our more senior and seasoned players are unable to get on the park.”