1. Format is best of both worlds

The Brumbies v Reds game on Saturday was brilliant. It was skilful, tough, well officiated, fast and yet true to rugby’s essence, with the set-piece as central to the outcome as Jordan Petaia and Hunter Paisami’s matchwinning pieces of skill at the end. But the quality of the fixture is self-evident: what might be more interesting is asking if Australia and New Zealand have stumbled upon the best structures for their Super Rugby seasons.

That is, separate domestic competitions that provide a national champion and then a cross-Tasman competition to crown the best team in Australia/NZ/Pacific Islands. It would be a punchy and parochial format that would seem to capture the best of both worlds. The broadcasters would have to get on board but the outcomes of the past four games in Super Rugby AU have all been in doubt until the closing minutes. Isn’t that what we want? 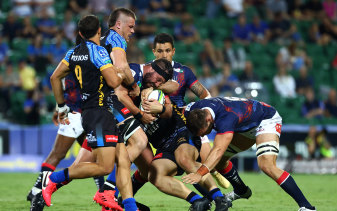 James Hanson runs the ball for the Rebels against the Force.Credit:Getty

The Rebels probably wouldn’t have beaten the Force in Perth on Friday without Hanson. He played the full 80 minutes and was a cool head in those strange final minutes, making 12 out of his 13 tackles over the course of the game. He also played a key role in Joe Powell’s excellent try in a strong all-round display.

It used to be commonly held that players coming back to Super Rugby from Europe – especially those in their 30s – would be too slow to make an impact, but Hanson looks in great nick (as does the Force’s Sitaleki Timani). So, Hanson has to be in the Wallabies’ conversation at hooker, especially as they aren’t particularly blessed in that position.

The Brumbies were undone by an issue that has hurt them for the past two weeks – restarts. That might seem like a technical gripe but in a game where a lot of points are scored, the restarts become like the third set-piece. Some of their best players either didn’t look comfortable receiving the football – Pete Samu and Cadeyrn Neville – or flat out made mistakes – Andy Muirhead and Rob Valetini.

But Valetini’s late mistake doesn’t override a performance that was his best in Super Rugby by some distance. He was the dominant physical force among the back-rowers, on the both sides of the ball, and that’s no mean feat given the company he was in.

Taniela Tupou was unstoppable, a tour de force performance that will have caught the eye on both sides of the ditch. His power scrummaging and ball carrying means the Reds are a team that deserve respect, paticularly when they constructed another neat short-side try (remember round one against the Waratahs) with James O’Connor and Harry Wilson involved. 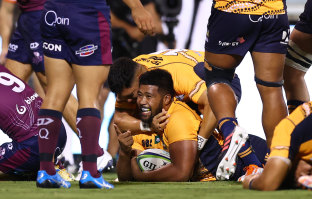 Folau Faingaa celebrates a try for the Brumbies against the Reds.Credit:Getty

The Brumbies fall two places due to their growing injury list but the Rebels move into the top five after a good away win to wrap up their tough start. 1. Crusaders 2. Reds 3. Blues 4. Brumbies 5. Rebels 6. Highlanders 7. Force 8. Hurricanes 9. Chiefs 10. Waratahs

Cully's team of the week

* Player of the round