Christian Welch knows he was selfish and reckless but he wants to turn the emotions from breaking team protocols into premiership success.

Last month the 26-year-old Storm and Queensland prop made the most uncharacteristic decision of his career when he let an “unregistered guest” into the team’s residences at a Sunshine Coast resort, breaching COVID-19 protocols. 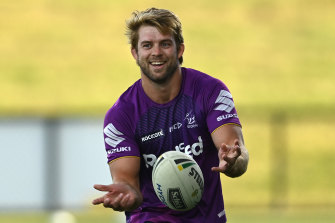 Christian Welch was glad to sign a new deal with Storm this week.Credit:Getty Images

Fortunately, Welch was recalled and with the Storm spending this week resting ahead of a preliminary final in Brisbane next Friday, Welch and the team confirmed he has extended his contract for the 2021 and 2022 seasons which will take his stint at the club to 10 years.

"I came here as a pretty skinny 18-year-old who didn't know much about footy and was searching for an opportunity," Welch said.

"It has been such an amazing journey to go on and the people who deserve the most thanks are my parents and my family for being so understanding and letting me pursue my dream away in Melbourne."

Welch worked his way back into the side for last week's qualifying final, where he ran for 191 metres and gave the side endless energy.

He is grateful for every minute and he is showing it with his play.

"That [breach] weighed heavily on me. I was really distraught, it was such a stupid thing to do," Welch said.

"I'm excited to be back playing and we are in a preliminary final next week. It's been such a bizarre year but it will be amazing if we can look back having gone all the way this year."

Last season Welch was closely linked with a big move to another club before a second knee reconstruction in August saw those possibilities disappear.

He extended his contract for 2020 and regained his fitness, returning to the field when the NRL season resumed from its COVID-19 break.

"I was probably about to leave last year then got injured," Welch said.

"Earlier this year it wasn't looking that positive to stay on with the Storm but that's how footy works.

"There was a bit of interest that came after playing a few good games. It was always my first priority to stay. I love this club and everyone involved."