Port Adelaide backed up from their statement win over Richmond with a business-like victory over Carlton at the MCG on Saturday night. 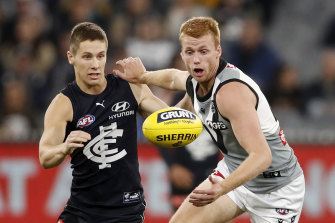 One day the Blues might be as good as the Power but right now Port Adelaide are a team with the premiership in their sights and Carlton are well back in the field.

Mitch McGovern returned to the Blues for the first time this season kicking a goal and picking up a few possessions.

The only downside for the Power was the loss of star midfielder Dan Houston to what looked like a shoulder injury. Houston tried to return to the field after seeking treatment but he clearly had issues raising his arm so was replaced by medical sub Willem Drew.

Carlton key defender Jacob Weitering suffered an accidental head-knock while attempting a mark in the third term as his head came down right into the path of Wines’ hip and made heavy contact.

Weitering was noticeably unsteady on his feat but somehow shrugged off the trainers and took his free kick before being forced to leave the field about a minute later.

Surprisingly Weitering passed his concussion tests and returned to his teammates for the three-quarter-time break. It was a lucky break for an incident that looked far more serious.

Gray’s ability to goal from all angles was on show in the first half on Saturday night as he nailed kicks from both the left and right boundary lines before kicking a third from the goal-square.

Alongside him was young gun Georgiades who made the most of a very advantageous kick from outside 50-metres during the second term.

Georgiades managed to strike his low kick so it drifted over the head of Gray and his opponent before bouncing in the goal square and going in, even Gray turned and gave his young mate a nod after the goal, or perhaps a look of surprise.