Home » Rugby » Snapshot: The Hawks coaching legend who knew how to engage fans

It’s nearly 36 years since this photo was taken of a young boy with one of the greatest coaches of all time in Allan Jeans, who was a master of fan engagement before it even became a term.

When we saw the photo Snapshot could not resist the temptation of finding out what the boy’s thoughts were about the Hawks in 2022 given how much has changed in that time, so we chased the subject down to find a diehard Hawk, Regan Phelps, now aged 42.

The fleeting moment in the middle of the ground alongside Jeans has never left the memory of Phelps, who recalls heading out on to the ground in an attempt to get Jeans’ autograph as training was winding up at the old Glenferrie Oval. 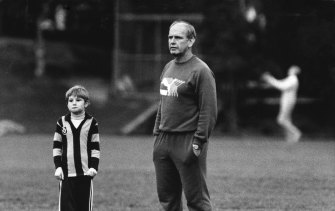 There with his brother Andrew, the young Hawk made it to Jeans’ feet without the master coach even blinking, merely saying ‘hello’ and contemplating whether he would ‘fry, grill or curry the players’ (as per Jeans’ famous quote explaining the art of coaching) ahead of the final to be played that weekend.

Phelps met Jeans a few times afterwards with the great man graciously telling Phelps he remembered him while signing the photo. The coach’s demeanour kept Phelps, now in the printing business, a loyal Hawk through good times and bad.

“No matter how old I was when I was around him, I would get a bit tongue-tied,” Phelps said.

In his mind, Jeans still ranks just behind ex-Hawks coach Alastair Clarkson among the greats, as Clarkson becomes the hottest coach outside the game in 2022 albeit midway through a career still 186 games behind Jeans, who finished his 576-game coaching career with a winning percentage higher than Clarkson holds now.

But Clarkson’s presence at another club will not move one Hawk supporter to switch clubs as fans such as Phelps stay with the team for better or worse that made an impression on them from the start.

Jack Riewoldt resumed a habit on Saturday at the MCG, when he kicked the first goal of the game for the 49th time in his illustrious career, the most of any player since such records were kept.

Riewoldt’s goalkicking exploits are being overshadowed by Tom Lynch’s hot patch, but the veteran has kicked at least two goals in each of his past six matches, and he heads into Dreamtime at the ’G as the leading goalkicker in that match, which began way back in 2005.

Riewoldt has kicked 26 goals in his 13 Dreamtime match appearances, having made his AFL debut in the third Dreamtime at the ’G match in 2007.

Although those inside the clubs might describe the race for a premiership between Gold Coast and the Giants as a phoney war, the expansion clubs reached another launching point on the weekend when both fielded teams with the same average age of 25 years, 115 days.

So with a new coach coming to the Giants at season’s end and the Suns on the up, it’s time for the clubs to restart their engines and resume the race. Which expansion team can hoist the flag first? 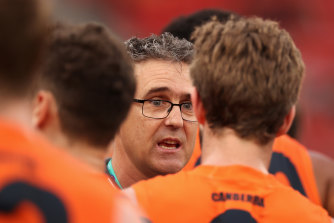 Speaking of ages, we can safely say after nine rounds that Essendon’s time without a finals win will turn 18 on September 4 this season.

That’s older than champion defender Dustin Fletcher was when he made his debut in 1993.

Thankfully, the Davey twins, earmarked as potential father-son recruits for the Bombers at the end of the season, came into the world together on 26 February 2004, meaning they knew what winning finals was about before they learned to walk.

Crows triumph in the battle of the birds at Marvel