In-demand coach Alastair Clarkson has expressed his regret about this week’s “embarrassing” circumstances as multiple clubs vie for his services.

The four-time premiership legend said it was unfortunate that the current coaches at Essendon, North Melbourne and Greater Western Sydney were negatively affected by the situation. 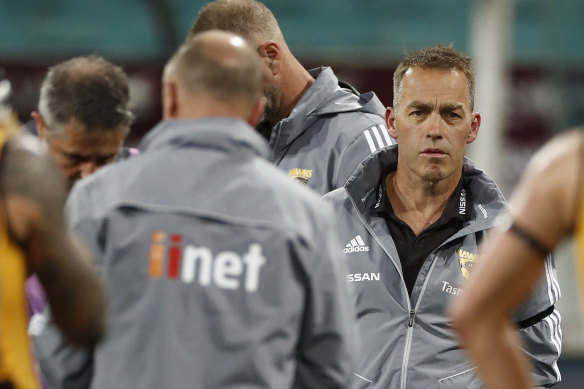 In the case of Essendon’s pursuit of Clarkson, Ben Rutten is a senior coach under contract while the Kangaroos and Giants have caretaker coaches, Leigh Adams and Mark McVeigh respectively.

Clarkson acknowledged that the situation would be resolved the quickest once he was able to make a decision about this future.

“It’s quite embarrassing to be fair, to be such a central figure in all this,” Clarkson told Channel 10.

“I’ve got enormous respect for the three guys involved in their clubs, ‘Spike’ McVeigh, ‘Truck’ Rutten and ‘Patch’ Adamsare all terrific football people and they’re trying to do the right things by their clubs.

“In particular, the situation with Truck, he’s still got a year on his contract to run and it’s quite embarrassing to be the centre of attention in a situation when it’s so difficult for him and his club.

“I’d prefer to be able to get off the back page and I know full well this circus will all end when I can make a decision one way or the other, so the sooner I can do that, the better.”