South Africa refused to blame Covid chaos for their second-half struggles and defeat in the Lions first Test, saying they now have ‘fire in the bellies’ for next Saturday.

Up 12-3 at half-time, the Springboks were pipped to the post and now must become only the third side to come from behind to beat the Lions in a Test series after the Australians did it 2001 and New Zealanders in 1930.

Their captain Siya Kolisi – who with Makazole Mapimpi, Ox Nche and Bongi Mbonambi was in isolation after testing positive for the virus until Monday of this week – said: ‘I can’t blame Covid for anything, we had a great week of training. 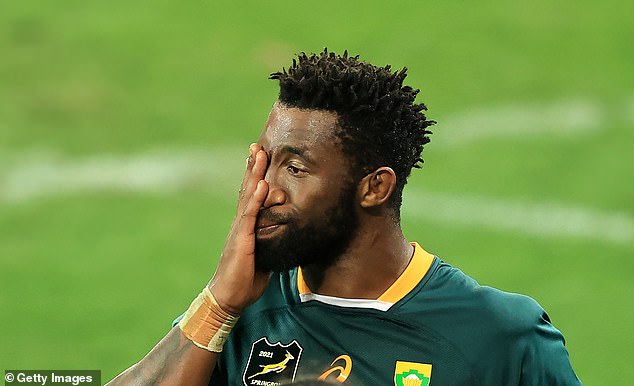 And boss Jacques Nienaber, in charge of just his second Test having taken over from Rassie Erasmus in 2019, agreed adding: ‘It is well documented we haven’t played a lot of rugby together and I think it would be naive to say it doesn’t have an effect but if you look at what happened in the first half, we had good cohesion.

‘I don’t think we can look at that as an excuse and say Covid was the reason why we didn’t dominate or have parity in the air because we did in the first half. We had three opportunities to score and get over the try line and I think we got over all three times but unfortunately twice we got brought back.

‘That is how close it is, the margins are inches and in one instance the inch went for us and in the other two instances it didn’t go for us.’ 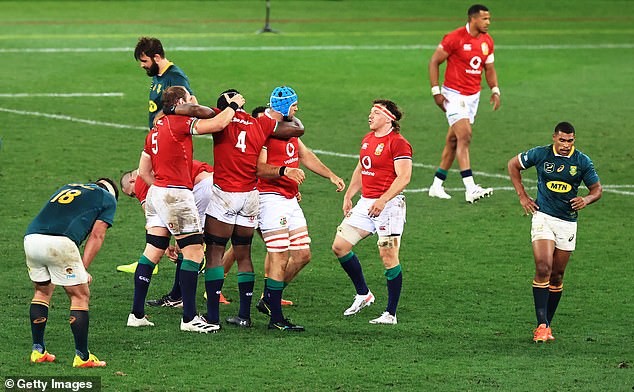 Faf de Klerk, the scrum-half, was bullish about the Boks’ chances despite the loss.

‘It’s a three Test series, we need to hold our heads up high tonight,’ he said.

‘We are a proud team, a proud nation. We’ll definitely come back with a bit more fire in our belly. A bit more anger, but we need to control the anger to make sure our discipline is in check.

‘It’s going to be another massive challenge next week, but we’re looking forward to it.

‘We’re wounded Springboks, we like having our backs against the wall and we can fight our way out of that.’ 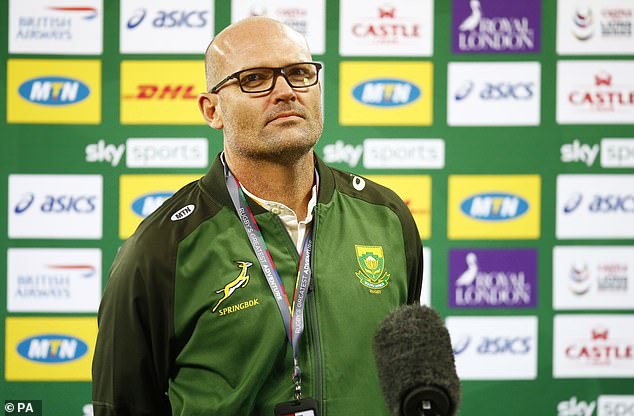 Jacques Nienaber, along with Kolisi, said his side can’t blame Covid for second-half struggles