Controversy surrounding Rassie Erasmus has continued to engulf South Africa as they announced a reshuffled line-up to face England at Twickenham.

Their divisive director of rugby is serving a ban which means he will not be there, but the fallout from his latest outburst shows no signs of abating.

Head coach Jacques Nienaber named a side featuring recalls for lock Eben Etzebeth, wing Makazole Mapimpi, centre Jesse Kriel and No 8 Evan Roos, but then had to face more questions about his boss. 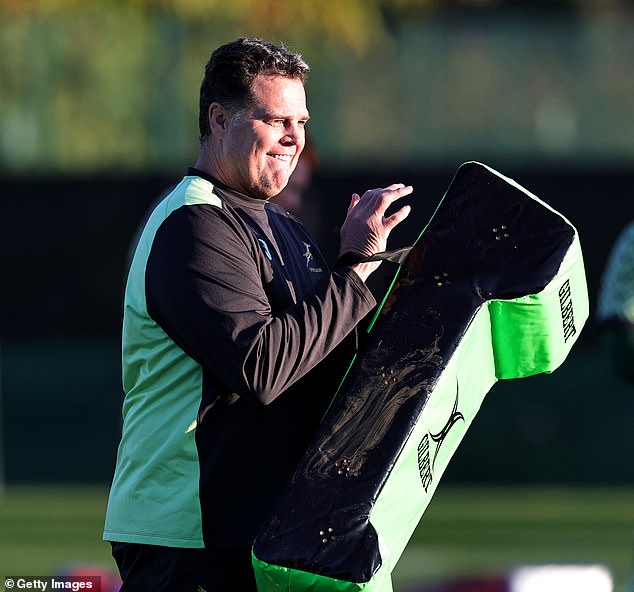 He had not long returned from a 10-month ban after a character assassination of referee Nic Berry during the Lions series.

Nienaber was asked about the impact of the situation and said: ‘During the week it’s as per normal. He’s with us, it’s just he’s banned for matchdays. The responsibilities he fulfils on matchdays we just absorb.

‘There will be a lot of questions about the ban. As a coach, I don’t want to go into those things. I will focus on the rugby.

‘Everyone knows exactly what has been going on. We’re open and transparent. Sometimes, it’s disappointing when only certain facts go out. If all the facts are out there, people would form a different opinion. 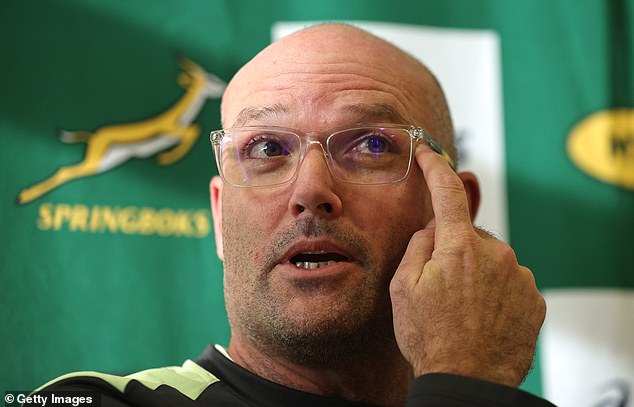 ‘The main thing is we focus on the rugby and make sure we prepare our players.’

When Nienaber was asked to clarify what facts are being missed, he added: ‘I think it will probably come out. There is a lot of confidentiality that we’re not allowed to talk about, especially with media.’

The Springboks have fostered a siege mentality, but have they suffered reputational damage?

‘We can’t control other people’s opinions,’ said Nienaber. ‘We know what happens inside and how tight we are as a group. That’s what we can control.’