“I hated the person it turned me into,” the St George Illawarra NRLW coach says ahead of Sunday’s grand final. 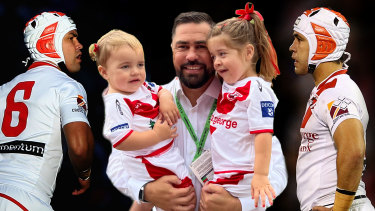 Jamie Soward as a player with the Dragons (left and right) and Jamie Soward the coach with his daughters Ivy and Indiana.Credit:Getty

“This now is how I was as a kid. Free flowing, more approachable. I still get grizzly, don’t get me wrong, but that’s my personality. Footy made me selfish. I turned into someone I wasn’t. I was very ego-driven, trying to protect myself and not let my guard down.

“I was perceived as an arsehole, this arrogant bloke who was only worried about himself – which I was. But I had to be because my life at the time was judged on wins and losses. People would say ‘stop and smell the roses, Sowie’. But mate I didn’t even see any roses at times when I was playing.”

It’s been 12 years since Soward helped the Dragons win the 2010 grand final.

On Sunday he will come full circle. He finds himself as the coach of a Dragons team looking to win its first ever women’s premiership against the same team he did it against as a player. 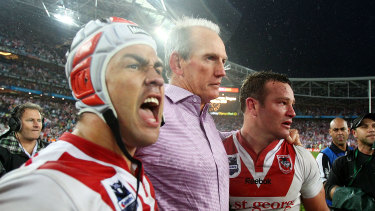 Jamie Soward with former coach Wayne Bennett and teammate Dean Young after the 2010 grand final victory against the Roosters.Credit:Getty

“If you were writing a movie script, it’s like it’s been done that way for the drama,” Soward said of taking on the Sydney Roosters.

The irony of Soward sitting in the coaches box, presiding over a female rugby league team, is that there was a time when he would have shown little interest in the women’s game.

“Jamie Soward the player was very protective, wore the chip on the shoulder – as you know,” he said.

“I wouldn’t have taken any notice of the women’s game or been invested in it. But Jamie Soward the dad and coach is more aware of his influences and appreciates his surroundings a little bit more. As a player my life was about wins and losses. But my wife Madi coming into my life, it’s opened me up to seeing things differently and gave me two beautiful little girls. 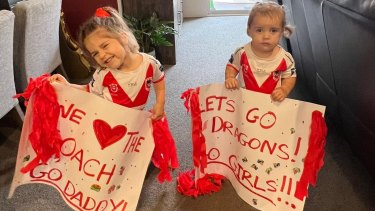 “That’s the best thing I’ll ever do. Being a husband to Madi and a father to those two little girls. Now the most important thing for me is to be a great role model for those two young girls to show them that they can do anything they want to do in this world.

“They have no idea or care that in six days’ time the furnace is going to be right under us and we’re playing for history. But I love that. When you get home and the girls say ‘Dad, I just want to play blocks’, you realise there’s more to life than wins and losses.”

The Dragons head into the grand final as the heavy favourites. Few gave them a hope of winning this year’s premiership before a ball was kicked, especially with a rookie coach who’d never spent a day in the role for any rugby league team.

But in the loss to the three-time champions Brisbane during the season – one which Soward would have struggled to accept as a player – he began to appreciate just how far he’d come as a person. 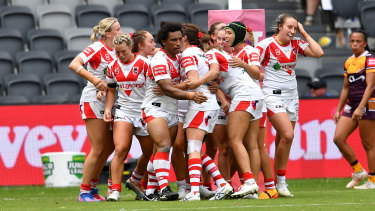 The Dragons fell short 22-18 against the Broncos in round three, their only loss of this year’s NRLW campaign.Credit:NRL Photos

“I’m standing there with 24 girls looking at me in the sheds after we’ve just pushed the three-time premiers to the brink,” Soward said.

“They’re sitting there thinking ‘Is he going to be angry? What’s he going to say? I just sat back and thought ‘man, this is cool. This is learning. This is coaching’. It wasn’t about me anymore, and I loved that. It’s like being a dad. It’s about whatever you can do for your wife and your kids.

“One of the things Hook (Anthony Griffin) has taught me is that letting your guard down and putting your ego aside is a huge part of what it takes to be successful in anything, especially in a team environment. I didn’t think I’d love coaching as much as I love it so soon. And that’s because of the connection I have with this group of girls.”

The resentment Soward once carried towards rugby league, he held it equally – if not more – at the Dragons after he was shown the door in 2013. 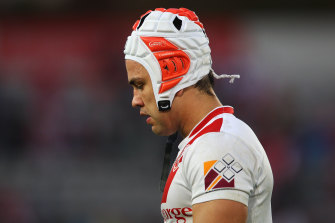 Jamie Soward was released by the Dragons mid-way through 2013.Credit:Getty

“I felt like that I had been forgotten,” Soward said. “I’m not going to lie – that hurt me.”

It’s why when Anthony Griffin – who Soward once detested for ending his career at the Panthers – got the NRL job at the Dragons, the former NSW Origin playmaker saw an opportunity to finally accept how his time at the club came to an end.

“That 2010 grand final, for Dragons fans, is the proudest moment they’ve seen,” Soward says looking down at the Red V tattoo he inked on his bicep after St George Illawarra lifted the trophy in 2010.

“When Hook (Griffin) got the job, I remember talking to him at 2GB about how cool it would be to come back to the Dragons and just be me. To let them see me for who I am now. Dragons fans love you or hate you from one week to another. That’s just how it is and you respect that because they care so much. 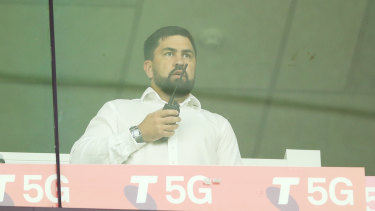 Jamie Soward in the coaches box.Credit:Getty

“But I’ll always be a Dragon. This is a special club with such a rich history. It’s why Sunday will mean so much more to me if I can help these girls experience what we achieved all those years ago. I’ve got goosebumps just talking about it.”

The last time the Dragons played against the Roosters, the team visited the club’s museum in Kogarah the night before the game.

They revisited the stories about Norm Provan and John Raper. The great Reg Gasnier. Then they saw images of their coach alongside the 2010 premiership-winners.

“I don’t think some of the girls realised I played in that team,” Soward said.

Is British Lions vs Sigma Lions on TV today? Kick-off time, channel and how to watch South Africa tour match