Rassie Erasmus has been hit with a two-match ban by World Rugby in response to his social media posts in the aftermath of South Africa’s defeat against France in Marseille last Saturday.

The Springboks’ controversial director of rugby is barred from any match-day activities when the world champions face Italy this weekend and then England at Twickenham on November 26. Erasmus’s latest ban ‘includes engagement with media and social media in relation to match officials’.

There has been a backlash outside South Africa in recent days, against the man who led the Boks to global glory in 2019. His Twitter comments relating to the defeat at the hands of the French were widely regarded as casting doubt on the decision-making of Wayne Barnes – the veteran English referee who recently celebrated taking charge of his 100th Test, while purporting to show how South Africa needed to improve aspects of their game. 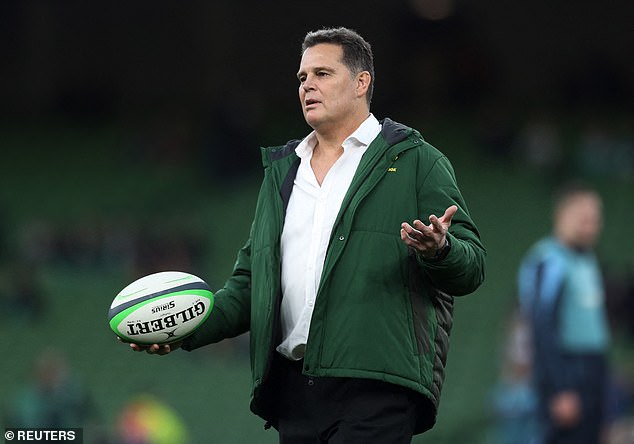 Erasmus was banned from match-day activities for 10 months late last year, as punishment for fierce and forensic criticism of Nic Berry during the Lions tour, which the Australian official described as amounting to a ‘character assassination’.

In that case and in relation to Barnes, the concern in many quarters is that these public barbs from such a prominent figure in the sport created a toxic environment which encouraged others to lash out, often on social media.

In their statement last night, World Rugby said: ‘Match officials are the backbone of the sport and without them there is no game. World Rugby condemns any public criticism of match official selection, performance or integrity, which undermines their role – and the values that are at the heart of the sport.’