Stan Sport has settled on a price for its sport package as the launch date for the new home of rugby nears.

Sources with knowledge of Stan’s pricing discussions say the streaming company will charge a supplementary fee of about $10 a month for access to its sports package, which includes every Wallabies Test, Super Rugby, Shute Shield, the Hospital Cup, Mitre 10 and the Currie Cup, as well as tennis grand slams Wimbledon and the French Open. 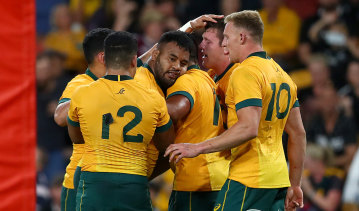 Rugby fans will be able to watch every match of the season live on Stan Sport.Credit:Getty Images

To access the sports package, fans must also have a subscription to Stan’s main non-sport streaming service. Given the cheapest main-service subscription is $10, the total cost for access to Stan Sport will be about $20 per month.

Stan, which is owned by Nine Entertainment, publisher of this masthead, settled on the cost after price-sensitivity testing.

Senior figures at Stan were aware of talk the total package might cost up to $25 – putting it on par with Fox Sports' streaming product Kayo, which has every NRL, AFL and cricket match as well as a range of other less popular and overseas sports.

Market research also showed there were many hardcore rugby fans who would happily shift from their Foxtel or Kayo subscriptions and pay the hefty price tag but Stan was eager to ensure better value for money in an attempt to attract as many new customers as possible.

The package is set to be launched near to the Super Rugby AU start date of February 19, when the Waratahs travel north to face the Reds before the Force host the Brumbies in Perth.

Nine and Stan are yet to reveal the talent that will front the broadcast on both channels as work on the product offering behind the Stan Sport paywall continues.

But both Nine and Stan are eager to make a showpiece of club rugby. While both Shute Shield and the Hospital Cup will be produced by Rugby Australia, Nine is understood to be willing to offer extra resources in the form of cameras and other technology for marquee matches.

Nine will also offer up star personnel – including lead caller Sean Maloney – on weekends in which the Wallabies are not playing and club rugby is still running.

Nine does not yet have the rights to schoolboy rugby but if discussions with schools are successful, GPS matches in both NSW and Queensland could be broadcast in years to come.