Home » Rugby » Steady Eddie: Why Jones has stayed at the top of his game for decades

Like the cry of the cockatoo at dawn, like the howl of the dingo at dusk, in the depths of every winter in Australia now, the shriek goes out . . . 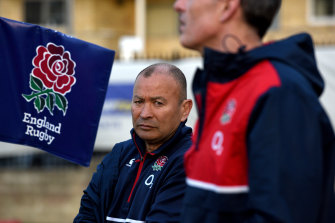 The one-time scrappy Randwick hooker – who learnt his trade in the same pack that boasted fellow international coaches Michael Cheika and Ewen McKenzie – is back in Australia at the head of the England team as they prepare to take on the Wallabies in a three-Test series, starting this Saturday.

Of course, we know not what will transpire, how the two teams will fare. The only certainty is that – as it has ever been since he started coaching professionally a quarter of a century ago – it will be Eddie himself who will take the headlines, and rightly so. He is a man with detractors as fierce as his disciples, but no one disputes that he is the most fascinating figure in world rugby. Players, administrators and other coaches come and go. Eddie goes on. And on. And on.

Looking back at the past four decades, it seems extraordinary how that Randwick hooker – as scrappy as he was yappy – we chased all over Coogee Oval, should have had the extraordinary coaching career he has. He was dead unlucky not to have played for the Wallabies, only thwarted because in 1989 Bob Dwyer picked a Randwick reserve-grader by the name of Phil Kearns to make his debut in the Wallabies front-row, but these days that fact is only a minor footnote to the rest of his career. 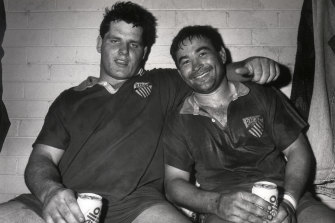 He has since become, by far and away, the most significant coach in world rugby. No, not quite the messiah – as he is yet to coach a World Cup-winning side, and you don’t get that title unless you scale those heights. But for more than the past two decades, Jones has generated headlines for extraordinary achievements, and the occasional gutting failure.

He has done it through serious rugby nous, an ability to evolve, a work ethic that would kill a brown dog, and an intensity with his charges that is probably just the other side of insane.

Yonks back, I remember chatting with the then CEO of the Brumbies about the night Eddie had his first major breakthrough as a coach – guiding them to their first title win in Super Rugby. It was in 2001, at Bruce Stadium in Canberra, and the Brumbies had beaten the Sharks by an extraordinary 36-6. After the match, the whole team went out on the town, Eddie and the Brumbies CEO included, and the boss was with them until the early hours. The following day, however, a Sunday, he had to duck by the Brumbies HQ at 9am, and immediately saw something on his desk.

It was Eddie’s report on the season just gone, why they had triumphed – and, far more importantly, the things that had to be done, immediately, to ensure victory in 2002! 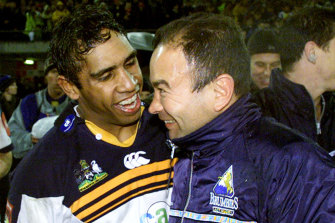 Eddie’s success was such that he took over the Wallabies instead, and if not for Jonny Wilkinson’s field goal in the 2003 World Cup final, he would indeed have been a World Cup-winning coach with Australia. No matter, the success of that propelled him into the rugby coaching stratosphere. This included being the assistant coach to Jake White’s victorious World Cup-winning Springboks in 2007, and of course – still perhaps his most fabulous coaching achievement of all – coaching Japan to victory over the Springboks in the 2015 World Cup. Stories would emerge later of Eddie minutely preparing his team for two years to win just that match – and they pulled it off!

And then, of course, he took on coaching England, where he has been for seven years. In all that time, while his intensity has never wavered, his style has. It is not quite that he has evolved with the times, rather that the rugby times themselves have evolved around him. In his first years of coaching, he was known as a stats monster, endlessly trawling statistics of both his and opposing teams to find whatever secrets could be unlocked. There has been less of that in recent times.

As I have recounted before, in 2016, after Eddie had guided his England charges to a 3-0 series win over the Wallabies, he very kindly agreed to speak at a breakfast – no charge – put on by the Hunters Hill rugby club. When it came to the secrets of his success, in questions posed by Gordon Bray, he talked mostly about the importance of picking players with the right character and then working them harder than the teams they were playing against. But here was the part I loved, when he was asked about the virtues of statistics.

One way or another, the only people who can survive, let alone prosper, in an Eddie Jones regime will be those who, just like him, put in all the time – and they need to have an approach to the game that makes a blowtorch look like a flickering candle. If I had been one of his players, I have no doubt Eddie would have dropped me off at the next station – on the off-chance I hadn’t already jumped on the railway tracks first just to get away from him.

His approach is not for everyone but it is hard to argue with his results, and he has been an adornment to the game. The only thing that could top his extraordinary career – and it would be the perfect final chapter – would be to return to these shores for good, and take the Wallabies to the summit in the 2027 World Cup.

Watch every match of the July Test Series on the Home of Rugby, Stan Sport. Kicks off this weekend with Wallabies v England (Saturday 7:15pm AEST), All Blacks v Ireland (Saturday 4:30pm AEST), South Africa v Wales (Sunday 12:55am AEST) and Argentina v Scotland (Sunday 5:05am AEST). All streaming ad-free, live and on demand only on Stan Sport.

Oliver and Gawn lift Melbourne to victory in Spud’s Game