Jack Steele capped his breakout season by claiming St Kilda's best and fairest in a landslide on Sunday night. 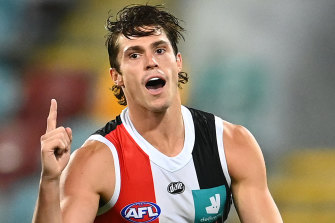 It was the culmination of a magnificent season for onballer Steele. Freed of the tagging duties he had been handed by former coach Alan Richardson, the former Giant was outstanding as a two-way midfielder in 2020, earning All-Australian selection for the first time. He also signed a fresh two-year contract with the Saints.

Steele also won the Lenny Hayes Award as the player who best upheld the values of the Saints' Crest throughout the season.

The success of list manager James Gallagher's recruiting spree 12 months ago was laid bare on Sunday night with four of the Saints' 2019 trade period acquisitions finishing in the top eight of the count.

Key backman Dougal Howard finished third behind Steele and Butler while Zak Jones (sixth) and Paddy Ryder (eighth) also featured in the top 10. Remarkably it was the highest-priced of St Kilda's "fab five" in wingman Bradley Hill who missed the top 10 after a season in which the Saints ended their nine-year finals drought and advanced to the semi-finals where their campaign was eventually ended by Richmond.

Big man Rowan Marshall backed up his strong 2019 with a fourth-place finish this season, while 2017 top-10 draft picks Nick Coffield and Hunter Clark both featured in the top 10. Coffield was named best emerging player.

Taken as a mature-age rookie at the end of 2018, defender Callum Wilkie finished seventh for the second straight season.

Reigning champion and dual best and fairest Seb Ross snuck into the top 10.

Andrew Johns: What Nathan Cleary must do in Origin II

Demons have ‘no doubt’ Jackson, Brayshaw will stay