Melbourne Storm chief executive Dave Donaghy has described some critics of the NRL as "ill-informed" following the backlash to the plan to resume playing on May 28.

Since the league announced its plans last Thursday, it has faced a host of critics who claim the league's desperation for television rights money has been put ahead of the safety of players and the general public.

Politicians and commentators at state and federal level have criticised the NRL, raising the likelihood that many of the social distancing restrictions could still be in place. 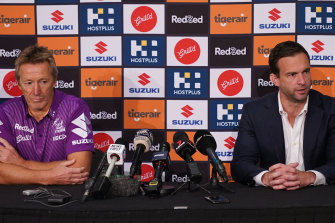 But Donaghy said critics had gone too far and May 28 was a "marker to aim for" and subject to change.

"Some of the comments are ill-informed around what guidelines will be implemented on our participants, if we are able to back on May 28," Donaghy told SEN 1116 on Monday.

"It's a new normal. It's not going to be, 'Let's pretend coronavirus doesn't exist and just carry on'.

"I think there is sometimes an ill-informed view of our game as being cavalier.

"We have a role to play in following the restrictions and guidelines set by the government like everyone else."

Football codes face unique challenges to resuming as players are constantly tackling and colliding with each other, which means all players need to be cleared of having or carrying coronavirus.

"If we are permitted to come back and play, when our players perform their work it's in a combative environment so we have to make sure they are kept healthy and well," Donaghy said.

The Storm hope to receive permission to begin training in Melbourne on May 1 although some of their players are still returning from New Zealand, like forward Brandon Smith, so face the likelihood of being in quarantine for 14 days after arriving back in Australia.

If the Storm are not allowed to train in Melbourne then the club will consider other options, likely in New South Wales.

"It's challenging at the moment, it's something we have to have a number of discussions about this week with my leadership team and our senior players," Donaghy said.

"We would need to be in lock-step with the AFL as I'm sure they will be wanting to get their season up and running whether in June, July or August.

"We would need some restrictions lifted in that space. If they weren't to come then we have to look at other options but one thing we have said is we don't want to be relocating players from their families for a sustained period of time.

"In pre-season we have been away for two to three weeks and that has worked OK.

"There are options to go to Sydney or the Central Coast and base ourselves there, there are some options in some of the border towns which would mean we are closer to Melbourne.

"But our preference is to stay in Melbourne and hopefully as we see numbers decline that could be the case."

South Africa vs British and Irish Lions: Who has the edge ahead of the first Test?