The Storm have officially overtaken the Panthers at the top of the NRL ladder after taking down the Warriors 42-16 at Central Coast Stadium on Sunday afternoon.

The Storm needed a win by at least 18 points to claim top spot and did so against a Warriors side missing fullback Reece Walsh and hit by a pair of injuries just before the break. 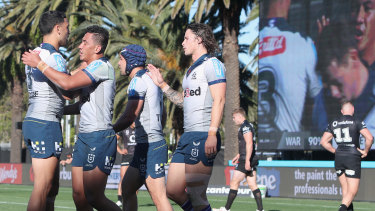 Things only went from bad to worse for the Warriors when Wayde Egan and Chanel Harris-Tavita were both injured within a minute of each other right before the half-time break. Harris-Tavita’s injury was later confirmed as a torn pectoral, which will likely end his 2021 season.

Alongside the review of the Munster kicking incident, the Storm will also be sweating on the judiciary result of Brandon Smith, who was put on report in the first half.

The fan favourite found himself in hot water after Josh Curran fell into his tackle after slipping while juggling the ball. 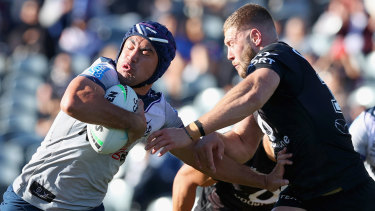 Jahrome Hughes tries to push off the Warriors at Central Coast Stadium.Credit:Getty

Despite the head contact being obviously accidental, Smith should count himself lucky after Bronco Kobe Hetherington was harshly sent off over a similar incident in Saturday night’s game against the Raiders.

The send-off was made more confusing with the match review committee only deeming the charge serious enough for a fine, which was handed down on Sunday.

Back in Sydney, there was some confusion at the Tigers when their new recruit Ken Maumalo not only ran out at Central Coast Stadium – but scored a hat-trick for the Warriors, their only tries of the day.

The club had believed their new winger wouldn’t be taking part. But a late injury to Rocco Berry forced the Warriors to select him an hour before kick-off, despite Maumalo signing an immediate move to Concord.

Technically, Maumalo’s Tigers contract begins on Monday, with the Warriors well within their rights to select him.

The contenders for the top job at Collingwood