The AAMI Park house lights were downed, the flame of remembrance was lit, and the laser lights flashed brilliantly in the dark as the military men and women staged a moving and dramatic ceremony to honour the memory of Australia and New Zealand’s fallen in two world wars and other conflicts.

It was a memorable and thoughtful performance, and certainly provided more sustained drama than most of the game which followed as the Melbourne Storm simply overpowered their New Zealand opponents the Warriors in the traditional Anzac Day clash. 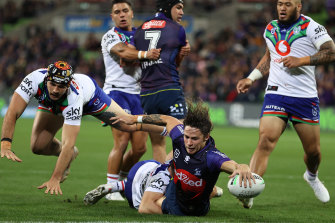 Doubles to Reimis Smith and Josh Addo-Carr helped drive the Storm to a 42-20 victory, lifting their record this season to five wins and two losses. Ken Maumalo’s hat-trick was a high point for the vanquished, while Storm’s Jahrome Hughes won the Spirit of Anzac Medal.

The game was in the balance for less than 20 minutes as the Storm began at quick tempo and took an early lead through a George Jennings try in the fourth minute, with Cameron Munster kicking the first of his five conversions.

The Warriors hit back within four minutes and it seemed this might be a closely fought encounter after all, with Maumalo going over in the corner after a pass from Josh Curran.

The latter was to be the key figure in the next few minutes as his crunching challenge on Jennings as he waited to collect a high ball in the 12th minute proved a pivotal moment.

After a delay and a referral to the video referee, Curran was sent to the sin bin for 10 minutes; the Warriors were always going to be up against it with 12 men against such remorseless, relentless opponents.

So it proved, as the Storm ground forward and made their numerical advantage count and the New Zealanders could do little when Felise Kaufusi went over in the 20th minute.

Curran’s return could not help his team stem the tide, and Storm full-back Nicho Hynes further stretched the lead three minutes later when he scored after being set up by Jahrome Hughes. Soon after, Reimis Smith found himself in space to make the most of Hughes’ excellent break.

When Smith finished again a few minutes later and Munster converted, the lead had stretched to 22 points (26-4). As half-time approached and a monsoonal rain storm descended, it promised to be a long night for the Kiwis.

To their credit, they regrouped after the interval and did score the first try of the second half through Ben Murdoch-Masila, with Kodi Nikorima atoning for his first half conversion miss by adding the extras to make it 26-10.

But although they had a lot more of the ball in the second period, that was as close as the visitors got, as Justin Olam stretched Storm’s lead once more. When Marcelo Montoya’s try was disallowed by a call from the bunker, the New Zealanders would have guessed their fate was sealed. 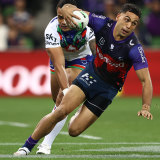 Reimis Smith goes on a commanding run against the Warriors.Credit:Getty Images

Addo-Carr made it 34-10 with 15 minutes remaining, and when he put on the afterburners again and slalomed past defenders three minutes later, with Munster converting, the scoreboard stood at 42-10.

Ken Maumalo’s second and third tries of the night as the game meandered to a close was a strong personal consolation, but the 20,320 strong crowd knew the outcome of this game a long time before it ended.