Melbourne Storm legend Billy Slater is in awe of how his former teammates and their families have turned being away from home for over 100 days into a potential NRL premiership.

But as the Storm prepares for Sunday's grand final against the Penrith Panthers, Slater is convinced his club won't get the acknowledgment they deserve should they claim the title. 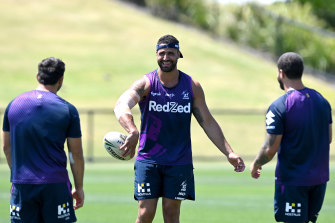 Storm’s Jesse Bromwich has a laugh at training teammates on Wednesday.Credit:Getty Images

They travelled without the families as opposed to the Storm who were able to bring their families to their Sunshine Coast resort base although they couldn't leave the resort for much of the season.

"Because the club is so successful and professional, I don't think this group have got the recognition for what they have done this year," Slater said.

"They are only one of two teams who had to pack their suitcase and move to a different destination to live and still perform at the elite level.

"The Warriors are the other side. If they had made the grand final you could imagine the stories and headlines that would surround that but because it’s the Melbourne Storm, it has become the normal thing that the Storm are successful.

"I think sometimes that gets lost, the enormity of what they have been able to achieve already and could possibly further achieve on Sunday night."

The Panthers have lost just one game this season and drawn another so they will start as favourites but the Storm will have the edge in grand final experience with the likes of Cameron Smith, Jesse Bromwich and Dale Finucane having played in multiple grand finals.

If the Storm come out as premiers, Slater knows it will be a special achievement.

"I'm back here in Melbourne and I think to myself, wow, what an achievement it has been and what it could be come 9pm on Sunday night," Slater said.

MCC wants cricket, not AFL at MCG on Boxing Day