The Western Bulldogs have won their sixth straight match, keeping their undefeated record in tact in a grinding win over the GWS Giants in Canberra on Friday night, 15.14 (104) to 9.11 (65).

But they won with a flourish, booting nine goals in the final quarter.

The win came at a cost, with young ruckman Tim English suffering a knee to his jaw from teammate Aaron Naughton in a marking contest late in the game. 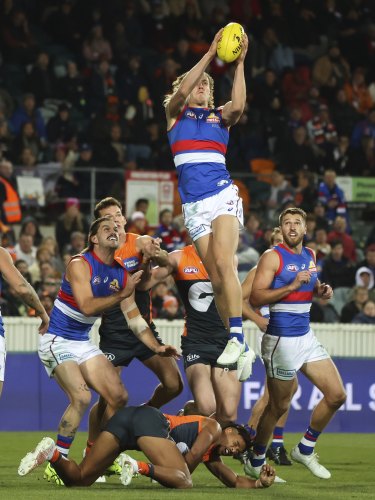 Lachie Hunter (19 disposals, one goal) was busy early while Bailey Dale finished with two goals late. Liberatore also kicked two goals and Naughton could have had a massive haul had he not kicked an inaccurate 2.3.

The young forward took nine marks including one on the final siren to seal the victory with his second goal. Josh Bruce and Lachlan McNeil also kicked two each, highlighting the spread of forward options at Whitten Oval.

SIR CLIVE WOODWARD: Now rugby's back it needs to entertain us