A Champions League style "Super Eight" concept, to run after either a domestic competition or trans-Tasman equivalent, and Australian rugby's own State of Origin series are two fresh ideas included by Rugby Australia in a new broadcast package that will be taken to market.

Monday's announcement came as interim RA boss Rob Clarke put the heat on New Zealand to make a call on next year, warning that "D-Day is coming" and made it clear Australia wants to formally begin negotiations by September 4 for a broadcast package that won't include the 2025 British and Irish Lions series in it. 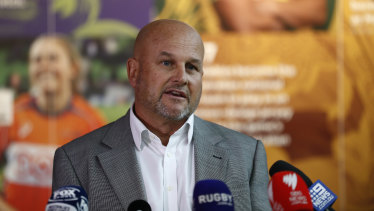 RA was forced to delay broadcast negotiations earlier this year for 2021 onwards due to COVID-19 and since then, the rugby landscape has changed significantly.

While a five-year broadcast deal is RA's preferred length, like previous deals, Clarke said consideration may given to reducing the duration.

Clarke has been working for three months to package up rugby content with John Knox, an independent advisor, and alongside a Rugby Australia board sub-committee.

He revealed on Monday RA is keen on the idea of a four-week 'Super Eight' mini-competition featuring the top two sides from Australia, New Zealand and South Africa – depending on standings in their own domestic competitions – plus a team from Japan and South America to battle it out.

What’s on the table

Australia have put a three-week deadline to New Zealand regarding a trans-Tasman competition, otherwise they’ll go it alone.

Rugby Australia will take the whole package to market; not give Fox Sports the first and only bid.

*2025 Lions tour will be sold separately from broadcast package.

The cross-over competition would be wedged between whatever provincial competition takes place and Test matches later in the year. It would need buy-in from other nations, in particular New Zealand, who are understood to be keen.

If a trans-Tasman competition does take place next year, which is still Australia's preferred option with all five of its teams involved, the top two Australian and Kiwi sides could still be plucked out to play in the "Super Eight" competition.

The final piece of the puzzle for Australia, before it can sign off on a new deal, is organising what next year looks like. New Zealand invited Australia to put forward expressions of interest to join its trans-Tasman competition but wants fewer teams from Australia than RA.

It's something RA still isn't budging on and is happy to go it alone.

"We have put a deadline for broadcast submissions of September 4 and before we enter into any final negotiations with a broadcast partner, this has to be settled. D-Day is coming," Clarke said.

"We can't wait much longer on the whole trans-Tasman competition decision. That has been going on now for some considerable period of time and I think it is only fair on the broadcast discussions we are having with potential partners that we are able to give them as much clarity about what the future looks like as soon as possible.

"We are doing what we believe is best for rugby in this market."

In terms of new competitions, RA is pushing ahead with its National Club Championship, which will see the best teams in Australia battle it out once their respective state-based seasons have finished.

While the three-game "State of Union" idea is the same as rugby league's annual showpiece, with players hailing from their state of birth, Clarke hopes it can possibly be snapped up by a free-to-air broadcaster. 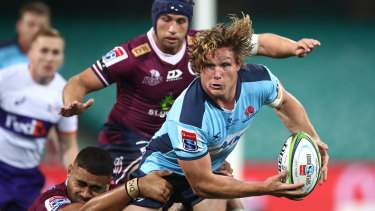 "The way we've constructed the packages is to try and encourage free-to-air [exposure], particularly around 'State of Union'," Clarke said. "We think that is a perfect competition to be on free-to-air.

"It will be building on NSW versus Queensland and the 130 years' worth of proud history that those states have.

"We would also like to see one match of Super Rugby be on free-to-air each week in addition to Tests. Our view is the more people that get to experience rugby through any media will actually drive greater interest back to subscription television."

Clarke said informal discussions had taken place with a number of broadcasters, which suggests RA is happy to give more than just Fox Sports a chance at becoming the home of rugby. However, flexibility will be offered, meaning certain tournaments or competitions could be owned by different broadcasters.

RA rejected an offer from Fox Sports earlier in the year for 2021-2025 rights and came within a whisker of inking a deal with Optus Sport before the COVID-19 pandemic hit.

"This will be, I think it's fair to say, probably the largest and most comprehensive collection of rugby rights ever put to the market in Australia," Clarke said.

Asked if he expected RA to receive less money than its current deal, Clarke replied: "If I had my crystal ball, I'd be able to answer that question. Ask me in three weeks' time or four weeks' time when this process is complete. We know that sporting broadcast rights have seen some challenging times in both Australia and in other markets around the world. That said I think rugby has an enormous amount to offer a broadcast partner.

"I'm naturally an optimistic person. I'm hopeful we're going to get to a great result.

"I think in a way we're entering the market at not a bad time because many of the broadcasters have gone through pretty fundamental re-negotiations with a number of other sports and so a lot of their heavy lifting there has been done. They have known we have been working towards a formal process around this time and so this afternoon [Monday] they'll be receiving those documents."

A major money-spinner is the 2025 British and Irish Lions tour but like New Zealand and South Africa had done, RA will do that as a separate negotiation.

"The challenge is that we don't have an agreement yet with the British and Irish Lions about what that tour might look like," Clarke said.