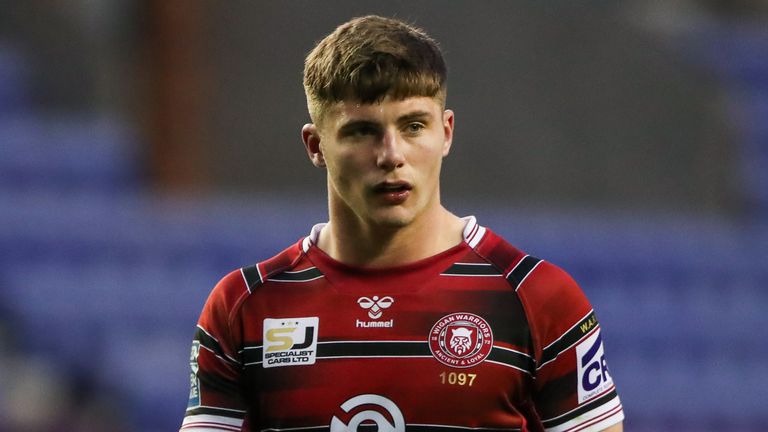 Ethan Havard may have been born in the Bulgarian capital of Sofia and spent some of his early years growing up in the rugby union hotbed of Bath, but the Wigan Warriors forward has always had rugby league in his blood.

That is in no small part down to the influence of his father Kieron – a Wiganer by birth, a man who had a short professional career as a centre with Salford and later coached his son as a junior at community club Wigan St Patricks.

It is little surprise that all Ethan has ever wanted to do is be a professional rugby league player with the town’s Super League club then, and the 20-year-old is now one of the current squad’s emerging talents with the advice from dad serving him well.

“My dad has coached me since I was probably five years old, so I’ve heard it for 15 years of my life,” Havard said.

“I’ve learnt a lot off my dad with him being my coach and a lot of life lessons from him, so that definitely helps.

“It’s just about being a professional, having a good diet and training hard every day. He always tells me to try to get a couple of stand-out things in my game to take it to an eight or nine out of 10 – that’s what you look out for.”

Perhaps the biggest lesson Havard, who last year extended his contract until at least the end of 2023, has learnt from his father’s experiences in the professional game has been to take nothing for granted, though, with an injury ending Havard senior’s career before it had barely begun.

Really happy to have extended my time at the club, excited for what the future holds 🙌 Thanks for all the kind messages. @WiganWarriorsRL https://t.co/kSmMf0zZC1

The recent enforced retirement of team-mate Dom Manfredi at the age of 27 due to a knee injury has further brought home just how cruel life as a professional athlete can be too, while Havard experienced it himself last year when he was sidelined with an ankle injury.

That did not stop him being crowned as Wigan’s young player of the year for 2020, though, and he is more determined than ever to build on what proved to be a breakout season for him.

“I learnt that last year when I did my ankle and was out for three months,” Havard said. “It was tough, and you feel like you’re not involved as much because you’re on the outside looking in.

“When I got back in and was fit, you don’t take it for granted as much. You take it in your stride and appreciate it more. Last year was my breakout year, but I’m still very young and still have a lot to learn.

“I would say there has definitely been progress and I’ve definitely learnt a lot since last year. Obviously, last year was my breakout year, but I’m still very young and still have a lot to learn.

“I would probably say there is plenty more improvement in me. I’m just getting a couple of starts under my belt now and building some momentum.”

The retirement of Sean O’Loughlin and the departures of Ben Flower, George Burgess and Joe Greenwood have left Wigan’s pack having something of a youthful look to it at times during the 2021 Super League season.

Havard is one of a clutch of young forwards, along with the likes of Morgan Smithies, Kai Pearce-Paul and Brad O’Neill, to have shown themselves capable of adapting to the rigours of top-flight rugby league in their place over the past 18 months, though. The return of Liam Farrell for Friday’s trip to fellow play-off contenders Hull Kingston Rovers on Friday, live on Sky Sports, will add some experience to the forwards as Wigan aim to build on their run of five wins from their past six matches.

And Havard believes the way the Warriors prepare their up-and-coming players in their youth system has a big bearing on so many of them being able to step up when asked.

“I’d say we have probably the best academy and scholarship set-up,” Havard said. “When you come up to the first team, it’s that next-man mentality – you’ve got to step up and you’ve got to do the job of the man before you.

“We all got our debuts pretty young and we’ve all been around the set-up for a good couple of years now, so in a way we’re pretty used to it.

“We’ve got Hull KR this weekend and that will be a tough game as well, so I would say it is buoyant and we know there is plenty of improvement in us.”