Wallabies second-rower Darcy Swain has been slapped with a mammoth six-match ban for a dangerous cleanout in last week’s Bledisloe Cup opener but will be eligible to play on Australia’s tour to Europe later this year due to a loophole exploited by Rugby Australia.

Just two months after being handed a two-game ban for a headbutt on England’s Jonny Hill, Swain was given a six-match suspension at a judicial hearing on Wednesday night.

Swain was cited by SANZAAR for a cleanout on All Blacks reserve Quinn Tupaea, who suffered a season-ending MCL injury.

Wallabies coach Dave Rennie said he thought Swain was unlucky to be yellow-carded but the All Blacks saw red, believing the hit was intentional and a dirty act.

“Having conducted a detailed review of all the available evidence, having heard from the player and from his legal representative … the judicial committee upheld the citing and deemed the incident meet [sic] the red card threshold for Law 9.11. 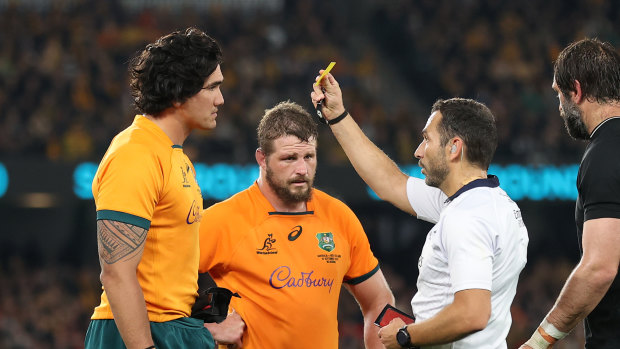 Darcy Swain is shown a yellow card for a dangerous tackle on Quinn Tupaea.Credit:Getty

“With respect to sanction, the judicial committee deemed the act of foul play merited a mid-range entry point of six weeks.

“Through the actions by the player such as position, control, and player movements they found the incident was not intentional, however it was highly reckless.”

Swain will be suspended until November 6 but could have been sitting on the sidelines for the remainder of the year if not for some quick thinking from Rugby Australia.

The 25-year-old was named in an Australia A squad on Wednesday for three matches on a tour to Japan in October.

It means that Swain will be able to use up half of his suspension – three of the six matches – for the tour which will see Australia A take on a Japanese XV.

The Wallabies are likely to maintain that Swain was always going to go on the trip despite playing three times more minutes in the Rugby Championship than any other player selected.

The six matches of Swain’s suspension will include Australia’s upcoming clash with the All Blacks at Eden Park on Saturday, three games on the Japan tour, plus Tests against Scotland (October 29) and France (November 5).

It means Swain will be available for three matches on the end-of-year tour, against Italy, Ireland and Wales.

Wallabies selectors may see value in keeping Swain in Australia to get a full pre-season but can pat themselves on the back for allowing him the option of returning in a gold jersey later this year.

All Blacks coach Ian Foster said he had “a big issue” with the hit.

“We’ve got a player who is probably going to be out for [a long period],” Foster said. “You’re not allowed to target legs on the side of the cleanout past the ball. The rules are pretty clear.”

Meanwhile, Rennie was quick to defend his player after last week’s Test.

“I’m not convinced about Darcy’s [yellow card],” Rennie said. “It was certainly nothing intentional. Ironically, he got neck-rolled prior to him cleaning out, but that wasn’t picked up.”

Swain’s absence will see Cadeyrn Neville start in Australia’s second row after his recovery from a knee injury he suffered against England in July.

Rennie and Foster will announce their teams on Thursday.

The Wallabies are looking to rebound after a dramatic 39-37 loss against New Zealand in Melbourne last Thursday.

Bailey Smith back for Bulldogs; Bruce likely to return

Staggs sends an injury scare through the Blues