Sydney have taken another big step towards a top-four finish with a 73-point demolition of a hapless Greater Western Sydney in the most one-sided AFL derby for eight years.

On a glorious Saturday afternoon at the SCG, the Swans had it pretty much all their own way, holding the Giants goalless between the dying embers of the opening term and the 25-minute mark of the third – during which time they piled on 10 unanswered goals in a fearsome display of the kind of scintillating football they’re capable of when they’re let off the leash.

Their pressure was consistently high and their ball movement, particularly in transition, was mesmerising, outmatching GWS in every department as they cruised to a 17.10 (112) to 5.9 (39) victory.

Importantly, the Swans made the most of this limp offering from their crosstown rivals to give their percentage a healthy boost. They have now squeezed past the Brisbane Lions into fourth spot on the AFL ladder, at least for the moment. Whether they end up with the double chance or not, no team will want to face the Swans in September if they’re playing like this.

This was also Sydney’s fourth win in a row – the first time they’ve done that this season – while the final margin was the heaviest in any Swans-Giants clash since round 21, 2015. 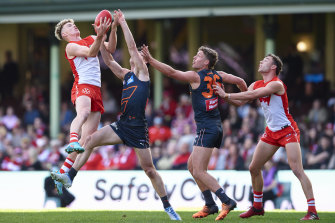 Sydney’s Chad Warner played like a man with nothing else on his mind but winning.Credit:Getty

The usual suspects led the way for Sydney. Luke Parker was everywhere, amassing 34 touches, six clearances and six tackles in a dominant midfield performance to claim the Brett Kirk Medal for the third time in a row, the first time any player has done so. It’s Parker’s fifth medal overall; no other player has won more than three in this fixture’s short history. Around him, James Rowbottom, Callum Mills and Errol Gulden were also influential on the ball.

Emerging star Chad Warner also showed he wasn’t overly burdened by the leaking of his nude photos on Friday – 10 of his 20 disposals came in a red-hot first quarter, and he played like a man with nothing else on his mind but winning.

For the Giants, who were barely represented in the 31,916-strong crowd, there was nothing good to take from this match. Before it even started, they lost co-captain Stephen Coniglio to ‘soreness’. It ended in their fourth defeat in a row by 30 points or more, which should be fatal to Mark McVeigh’s chances of going from caretaker coach to permanent. On paper, the talent is clearly there, particularly in midfield – but on grass, it’s much harder to see.

Aside from the opening seven or so minutes, when they looked up for the fight, they struggled to contain the surging Swans. At times, their lack of pressure or defensive integrity was diabolical.

The contest was basically over at quarter-time, with five of Sydney’s six goals in that term coming via turnovers. Once they clicked into gear, there was no stopping them. And there was only so much that Taylor – who’s surely on track for an All-Australian blazer and put in another tireless, gallant effort here – could do in the circumstances to stem the tide.

EGM not the answer: Major Magpies sponsor weighs in on club unrest