The Sydney Swans have traded key defender and fan favourite Aliir Aliir to Port Adelaide in exchange for a future second-round draft pick.

Aliir, 26, underwent a medical with the Power earlier this week and told Nine News as he was boarding a flight back to Sydney on Tuesday that he had to speak with his family before making a decision on his future. 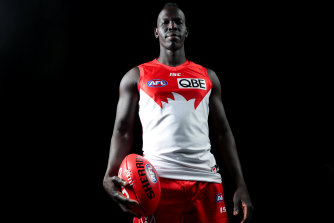 That decision has now been made, with the Swans and Power officially lodging paperwork with the AFL on Wednesday to facilitate the versatile tall's move on a four-year contract.

In exchange, the Swans will receive Port Adelaide's second-round selection at next year's AFL draft.

Aliir played 64 games across five seasons for Sydney and was thought to be a big part of coach John Longmire's plans, having been deployed primarily as a rebound defender but also as a pinch-hit ruck option when needed.

The deal has puzzled Swans fans but executive general manager of football Charlie Gardiner explained that while the club would have "loved to see" him stay, Aliir requested the trade so he could take up Port's long-term offer.

"We worked with Port Adelaide to arrive at a trade which sees us strengthen our draft assets and provides added flexibility to address our list needs during the trade period as well as support our position coming into the National Draft," Gardiner said.

"Aliir has been a great contributor and popular member of the team over his seven seasons at the Swans. On behalf of everyone at the Sydney Swans, we’d like to thank Aliir for the impact he has had during his time with our club and wish him and his family all the best for the future."

It appeared Port's interest in Aliir had fizzled out when the Swans initially asked for back-up ruckman Peter Ladhams in return – a trade the AFL minor premiers quickly ruled out.

Earlier this week, Swans chief executive Tom Harley told SEN he expected Aliir to remain at the club next season.

But Sydney have evidently decide to move Aliir on now instead of risking the possibility of losing him for nothing at the end of next season, when he was due to become a free agent.

It's the club's first piece of business in the AFL trade period, which ends at 7.30pm on Thursday, but it's unlikely to be their last, with Harley also confirming on Tuesday that the Swans had been in contact with West Coast ruckman Tom Hickey.

Sydney is short on ruck and key defensive options, but both issues could potentially be alleviated if a deal for Hickey is completed and if the Swans decide to use pick No.3 at next month's AFL draft on highly-rated defender Denver Grainger-Barras from WAFL club Swan Districts.

Premiership players furious after being overlooked in salary cap talks