Sydney Swans youngster Elijah Taylor has been banned for the rest of the AFL season with his club fined $50,000 – half of which is suspended – for breaching COVID-19 protocols. 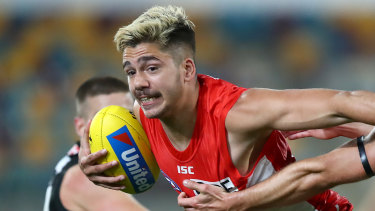 Taylor, who debuted in round seven and has played four games in his short career, was banned because his partner entered the Swans' hub in Western Australian. This is against the AFL rules and the WA government's pandemic protocols that allow footy to be played in the state.

"The AFL, in conjunction with the club, investigated the matter and has determined that Taylor be suspended for the rest of the season," a league said in a statement.

AFL general counsel Andrew Dillon said the actions were intolerable, saying there was "no excuse" for the breach.

“The actions by Elijah not only breach the AFL’s protocols, but made it a police matter by breaching the Western Australian COVID-19 quarantine directions," Dillon said.