Melbourne star Karen Paxman and North Melbourne skipper Emma Kearney are both on track to continue their perfect records of being named in the All-Australian team every year since the inception of the national women’s league having both been named in the squad again. 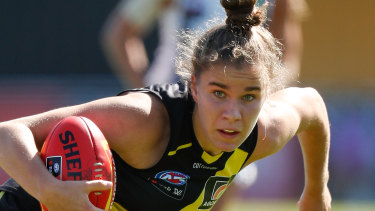 All 14 clubs were represented in the squad, with finalists Collingwood having the most players (six).

The final team will be revealed at the W awards on April 20.

McKenzie averaged 15.6 disposals, playing every game in her first season with the Tigers.

Paxman and Kearney both have four All-Australian team berths to their respective names.

Her five-vote performance against North in the final round tipped Bowers ahead of Greater Western Sydney’s Alyce Parker. Bowers was initially suspended for the last round but managed to get her sentence overturned at the tribunal.

Manly’s captain signed a ‘lifetime’ deal. He thinks it won’t be enough