Home » Rugby » Ten in a row: Waratahs rack up worst ever losing streak

The Waratahs were valiant in Auckland but chalked up a 10th consecutive loss this season to mark themselves contenders for the worst NSW team of the Super Rugby era.

Rob Penney might have been the fall guy for broader issues at the Waratahs but co-coaches Jason Gilmore and Chris Whitaker have been unable to turn around the and alarming run of results that has senior Australian rugby figures extremely concerned. 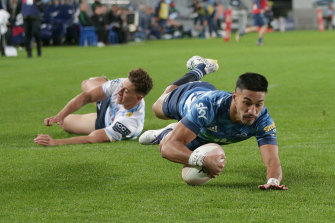 Rieko Ioane scores for the Blues to help condemn the NSW Waratahs to a 10th consecutive defeat.Credit:Getty

Any hopes of a Super Rugby Trans-Tasman miracle for the Waratahs have been swiftly dashed and the challenge gets no easier with a hit-out against the Crusaders next Saturday in Wollongong.

The Waratahs played better than the $26 price given to them by the bookies and certainly weren’t out of the contest when they trailed 22-14 at half-time.

Yet there is no sugar-coating the reality that their defence is not up to standard. NSW leaked four second-half tries.

From 10 matches in 2021, NSW have conceded an average of 40.4 points per game and 56 each in their two hit-outs against Kiwi sides.

Gilmore, who will apply for the head coaching job, is primarily in charge of the team’s defence.

The assignment was made more difficult by the late withdrawal of outside-centre Izaia Perese due to a groin injury.

The reshuffle saw Will Harrison promoted from the bench to fullback, marking the first time he and Donaldson had started together at Super Rugby level.

Yet it was chaos for the Waratahs early on the injury front. On top of Perese, they lost two second-rowers in Max Douglas and Jack Whetton – the latter of whom later returned – before No.12 Lalakai Foketi exited the field for a head injury assessment, forcing Harrison to move to No.12.

It was probably a good thing Whetton was brought off briefly, so bad was his defence. The Waratahs have got little value out of him this season after former general manager of rugby Tim Rapp convinced others at NSW he was worthy of a two-year deal. Whetton and another new Kiwi signing, Sam Caird, have barely been seen this season.

Trailing 15-0 after 30 minutes, the Waratahs found the spark they desperately needed through Angus Bell and Jake Gordon to trim the deficit to one.

Bell charged to the line through the middle of the park, while Gordon raced off his line and pinched an intercept to make things interesting.

The Waratahs had only ever beaten the Blues once away from home, doing so in 2009.

NSW missed 16 first-half tackles, with that number climbing to 24 by the final whistle.

Debutant and Shute Shield star James Turner missed four of his first five tackles, three of which led to tries. He and other Waratahs players struggled to keep their footing at Eden Park in the seven-tries-to-three defeat.

It was certainly a debut to forget for Turner at a venue that has haunted many Australian rugby players over the decades.

Applications for the Waratahs head coaching job have to be submitted by Friday. There will be a long list of names, but some could be forgiven for opting against putting their hands up due to the magnitude of the rebuild required.

Family ties: Nick Daicos to debut for Pies against Saints, as famous father did