Fans have long suspected referee’s decisions favour losing teams, while coaches are convinced of it.

Now, it’s official: the NRL’s own data demonstrates that in 2021 no club has won a six-again count when leading by 19 points or more in a match.

And only one of the NRL’s 16 clubs has lost a six-again count when behind on the scoreboard by 19 or more points.

Blowouts have been a scourge in 2021, with the data suggesting refereeing decisions are countering lopsided scorelines.

In the pre-Peter V’landys era, when penalties and sin-bins/send-offs were the only means a referee had to keep a team in a match, he or she was constrained by the TV cameras scrutinising a decision.

But six-again calls are made on the run, with no time for analysis. 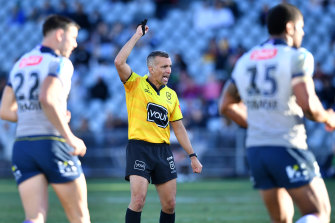 A referee can award a repeat set for a ruck infringement or for encroaching inside the 10-metre defensive corridor and the game moves on so swiftly, sometimes the attacking team is unaware it has been gifted six more tackles.

The Storm lead the NRL ladder but have the worst differential in terms of six-again calls won and lost, with minus 24. But of the 96 conceded, 23 of these are when ahead by 19 or more points.

Perhaps the referee’s historical role of choreographer is a reflection of their subconscious ego – a desire to keep the game close because an even contest reflects favourably on them.

More likely, maybe it’s a reflection of a love for the game. After all, blowouts embarrass the code. To be fair, the great majority of six again calls are deserved. The Bulldogs are last on the NRL ladder and top of the sinners’ list with 109 repeat sets conceded. Of these, 35 are when the score in the match is tied, against 17 received when the score is tied. 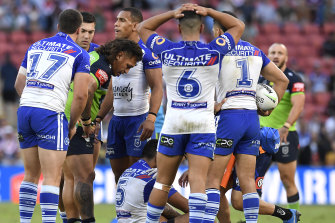 The Bulldogs’ statistics suggest ill discipline is the issue for Trent Barrett’s side.Credit:Getty

So, when the match is in the balance, the Bulldogs concede twice as many repeat sets as they receive, suggesting ill-discipline is their problem.

Referees also deserve some sympathy because some clubs are gaming the rules, deliberately conceding six-agains early in the tackle count when the opposition players are camped in their own half.

Titans coach Justin Holbrook said of the Rabbitohs after their 36-6 loss in round 22: “They were flying off their line. They didn’t care if it was six-again or not. Or how slow they made it. They knew we were buried deep down our end and couldn’t get out.”

Not surprisingly, Rabbitohs coach Wayne Bennett has a different view of lopsided scorelines, saying, “Coaches aren’t getting the best out of their teams.”

Hmmm. The Skinny Coach is ahead in the six-again department, with a differential of plus six. When the scores in a match are tied, Souths have won the count 20 times and lost it only nine times, indicating his lads know when to behave themselves.

The Panthers are second on the NRL ladder but lead the competition in terms of the six-again differential, having received a massive 25 more repeat sets than they have conceded.

When a match is tied, their figures are even more impressive than the Rabbitohs, receiving 16 more than they concede.

Wests Tigers is the only club not to attract the sympathy of the referee when being blown away by the opposition, conceding two more repeat sets than they receive. They are like the kid who, having been caned by the headmaster, said it didn’t hurt. So the headmaster says, “I’ll give you six again.”

If you’re not convinced referees have a heart, consider the itinerant Warriors, on the road now for almost two seasons.

When being flogged by 19 or more points, referees have awarded them 18 repeat sets, while punishing them only four times, suggesting even the match officials, like all of us, don’t want them to pack up and go home to New Zealand.

With the play-offs only two weeks away, and the top teams competing, blowouts should diminish but a six-again call will likely decide a semi-final.

Remarkably, the Sydney media erupted in 1978 when referee Greg Hartley awarded Manly a try on the seventh tackle, yet teams now routinely receive a further six tackles without a whimper.

As it happened AFL 2021 Round 2: Demons beat Saints in Spud’s Game while Shiel injured in Dons’ loss