This match will be much closer than people think. Parramatta are a different team at Bankwest Stadium – just think back to them holding Melbourne scoreless there last year.

It’s supposed to be wet in Sydney so it will be a grinding game and that makes the forward battle and kicking game so important. 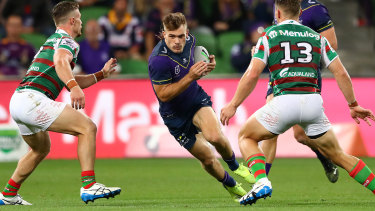 Wherever Papenhuyzen is standing, that’s where the ball is likely to go.

He’s getting better with each season and while he’s still behind James Tedesco and Tom Trbojevic as the game’s leading fullbacks, I expect him to own the No.14 jersey for NSW later in the year.

As for Munster, his first half against Souths was simply awesome.

He had a shortened off-season and, from all reports, he enjoyed it. Good luck to him. He’s just a footy player without fear and his combination with his fullback is lethal.

I’m mostly impressed with the balance of the Storm’s forward pack: the power of Asofa-Solomona, the hard work of Christian Welch and the aggression and enthusiasm of Brandon Smith.

They all work so hard in the little effort areas that nobody sees – but Craig Bellamy does. He measures those effort areas and it’s a big part of why the Storm are so successful.

How Parramatta can win

The Eels tried to trick-shot their way to victory in the first half against the Broncos.

It doesn’t work like that. No matter who you play, you have to build and earn that right.

Junior Paulo is the best prop in the game. He showed his class against Brisbane and I expect the same against Melbourne.

He’s got footwork, he’s smart, got soft hands with a late offload, and intimidates. He’s also incredibly fit and just keeps getting better.

The intriguing thing with Junior is that his teammates are still learning how to play with him: when to support him, when to shadow him in anticipation of the late offload.

Because of the wet weather in Sydney, I also reckon they have a real advantage with big wingers like Maika Sivo and Blake Ferguson coming out of dummy half.

Mostly, though, they have to play tough.

You cannot pass your way to victory against the Storm. You need 16 players turning up wearing the BHP boiler suit, who are prepared to play like back-rowers, with their halfback steering them around.

The grind. That’s the one thing I kept drilling into Mitchell Moses when we caught up at Eels training this week: he needs to grind out the win.

And he did that against the Broncos. His last 15 minutes is the template: he chased his kicks, made crucial tackles and was competing in every aspect of the game. 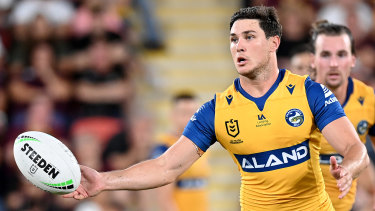 Mitchell Moses needs to lead by example for the Eels on Thursday.Credit:Getty

When he does that, he earns the respect of his forward pack. If they see their halfback doing that, the forwards will run into the Valley of Death for him all night.

I’ve been impressed with the way Mitchell responded to the disappointment of last season.

He cancelled a holiday and came back early to training. He seems calmer compared to previous years.

Against Melbourne, he’ll have to be because he’ll be under constant pressure from their forwards. The arm wrestle could go for 60 to 70 minutes.

He’s got to stay in the grind.

The danger play for Parramatta will be Papenhuyzen around the ruck.

Whenever one of the Storm’s forwards get a quick play-the-ball, and there’s only one Eels marker, watch Smith will run the ball.

He’ll drag that marker his way but then turn the ball inside to Papenhuyzen, who will get in behind the ruck. With his speed and footwork, he’ll be too fast for the opposition forwards.

That play is so simple but so effective for the Melbourne Storm.

The match-up between Clint Gutherson and Papenhuyzen will be a beauty but the one that will be most critical is that between the three starting middle forwards: Parramatta’s Paulo, Regan Campbell-Gillard and Nathan Brown up against the Storm’s Asofa-Solomona, Welch and Jesse Bromwich.

I’m tipping an upset. Parra will learn from their first half last week, they won’t be ambushed by the Storm as Souths were, and their offloads can really trouble the Storm.

Andrew Johns is employed by the Parramatta Eels as their halves coach.