The last four men to leave their fingerprints on the game as head of football have been a lawyer from neither inside the AFL nor inside a club, a club football manager, an internal promotion, and then another club person.

At turns the league has looked inside and out for candidates. They have sought change agents and they have found people who changed the game and even the very remit of what they were hired to do. 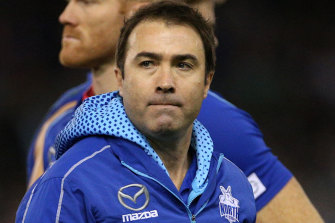 The job lost the juicy integrity matters it once had of salary cap and drugs and gambling but has now burgeoned to incorporate an entirely new competition in AFLW.

What type of person they look to after Steve Hocking is not obvious. After Simon Lethlean departed amid complaints of a boys’ club the AFL could not look inside for a replacement. Besides, the league wanted someone from “club land” to replace Lethlean, as though all club people thought the same way.

Looking inside the building the most obvious candidate to replace Hocking would be Brad Scott. He has an impressive playing and coaching CV, presents well and and is considered in his thinking about the game. He has spent 12 months now looking at the game from a macro level at Docklands.

Whether he is the right man for the job or not, does he want it? Right now Scott would also be a strong candidate to be the next coach of Collingwood. Does he see his future in coaching or administration?

Internally Rob Auld, the former AFL Tasmania chief executive and AFL competitions general manager, will also be on the shortlist.

Auld is also the brother of the league’s chief financial officer, Travis Auld, who is second in charge to Gillon McLachlan. Do they care for the appearance of nepotism and a boys’ club or do they just think he is the best candidate?

Andrew Dillon, the head of game development and general legal counsel, has for the second time stepped in as caretaker in the role. After taking on game development after being long-term legal counsel, which takes in integrity matters, he is qualified for the role and would be very good at it. But does he want it? Or do they want to restructure the role as has been mooted as a possibility and put him in charge of a broader overarching portfolio?

Former Richmond captain Wayne Campbell, who has been in football administration at the Bulldogs and then as football head at GWS, is well credentialed for he also headed up umpiring at the AFL and understands its internal mechanisms and politics as well as having respect at club level. But Campbell lives in Sydney and presently is disinclined to move.

James Gallagher of the AFL Players Association is a lawyer and respected operator whom the AFL could look to, though it might be premature and he might be sought at club level for a role as GM of football first.

As a left-field thought former Collingwood coach Nathan Buckley would be a clever choice for he is an intelligent thinker of the game and articulate spokesman. But it is highly doubtful he has yet extinguished his coaching flame, and more likely he would spend a year or so in the media before taking charge of another club. But the opportunity to influence the game at a macro level may appeal to him, and you can’t always choose when these jobs will come along.

West Coast football boss Craig Vozzo would be a likely choice because he is well respected among clubs as a smart and rational operator. But with family in Perth and Adelaide he is unlikely to want to move to Melbourne.

The location is also likely to rule out Tom Harley who as Sydney Swans CEO would have to wonder firstly if he wants to move back to Melbourne and secondly whether such a move would be a step up or a step sideways.

The same could be said of Simon Garlick the Fremantle CEO who was previously at the Bulldogs. He has just moved his family west so whether he wanted to relocate again would be a query.

The question for the AFL is whether they would look at Simon Lethlean returning to the job. McLachlan was deeply upset at Lethlean having to resign and was pleased to see him remain in football as St Kilda GM of football.

Does the AFL try to bring him back again now? And does Lethlean want to return to league headquarters? At the very least, of all the potential candidates he best understands the job.

The question for the AFL is not only one of the CV and of the names on a shortlist; it is what type of person they want as head of football.

Do they want a change agent? Steve Hocking came in to the position with a gusto to attack issues that had clearly annoyed him in the game. He managed the rare feat of introducing a rule change to a public that was sick of constant changes and received acknowledgment it had not ruined the game and might even have made it better.

But how much change is too much now? Do they want someone to be more aggressive and lateral in their thinking about where to take the game and to save it from the coaches? Or do they want the game to be left to evolve organically?