Home » Rugby » The (football) world is a stage, and players think umpires should police it

Former St Kilda goalsneak Stephen Milne can't recall being used as an example of what constituted staging when the AFL decided to crack down on the issue at the start of the 2010 season and released a video to clubs titled Staging Misconduct.

If he had a reputation among supporters of playing for free kicks he wasn't aware of it and no one from the AFL or coaches spoke to him specifically about changing his style. 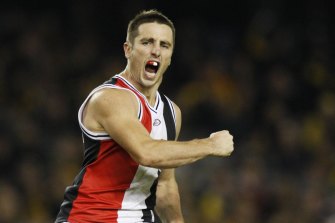 Stephen Milne believes staging should be regulated by the umpires.Credit:Vince Caligiuri

"I was pulled up by the umpire on two or three occasions and he said 'Milney', and I'd say, 'Yeah I wasn't meaning it', but you do try to trick the umpire every now and then."

It was part of Milne's charm and a tactic that most players – if not all – have used during their career, sometimes enraging supporters in the moment. Then the moment passed and it was forgotten without an official stamp to brand a player for life.

But everyone does it according to those who know such as Hall of Fame member Malcolm Blight, who reminded SEN listeners on Thursday that "staging has been going on forever". Even Geelong coach Chris Scott, who has a low tolerance for staging, said it's easy to be holier than thou about the issue until you're in the game.

"Sometimes these things are an instinctive reaction. You can say in principle I would never exaggerate contact as a player and then you are in the moment and before you know it you have done it," Scott said.

He said he was, in principle, against fining players as a deterrent and said he was happy when umpires told players they did not win a free because they ducked their head or exaggerated contact.

"I think that, in general, is good policy," Scott said.

A quick chat during a game helped regulate Milne in a career in which he kicked 574 goals in 275 games, slightly more than two goals per game.

He is philosophical about umpiring and players trying to win frees.

"I could have got 50 more free kicks and given away 50 more, you win some, you lose some," Milne said.

"I thought the two on the weekend [involving Richmond's Dylan Grimes and Nick Vlastuin] were not as big a deal as everyone thought they were."

Milne makes a good point in saying that the context of the match informs the reaction to what the players do, with the margin critical to how supporters and the AFL seem to respond.

"Every player has done it but if a player does it two or three times the name gets bought up such as [Tom] Papley … if it happens four or five times, they start saying are you doing it all the time," Milne said.

It's now 10 years since Milne, along with Lance Franklin, Alan Didak and Cornes, appeared on an AFL video to illustrate the new rule "staging misconduct".

It's become clear this week that the ramifications of officially labelling a player a stager have grown bigger than imagined possible.

The players, past and present, seem in favour of self-regulation.

Let the countdown begin: could Buddy kick his magical 1000th goal this season?