Long before Len Ikitau was a breakout Wallabies star, he dreamed of playing for the Canberra Raiders.

A talented teenager that had only played rugby during his primary school years in New Zealand, Ikitau signed a development contract with the Green Machine when he was at Marsden State High, south of Brisbane, the same school which produced Cameron Smith and Israel Folau. 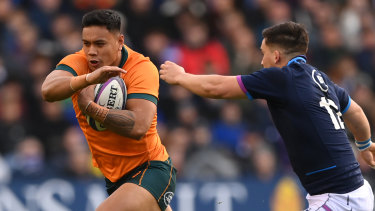 At that stage, Ikitau thought he was destined for the NRL.

While he was an All Blacks fan, rugby only became a consideration when a Brisbane Boys College talent scout offered Ikitau a full scholarship after watching him play at a carnival in Year 10.

“I was told it was a really good school. Mum and Dad wanted me to focus on school and all of that stuff, so I thought I should take it,” Ikitau said. “It’s the best decision I ever made.”

After two years in BBC’s 1st XV alongside fellow rising Wallabies star Darcy Swain, Ikitau was offered a bargain-basement deal with the Brumbies. 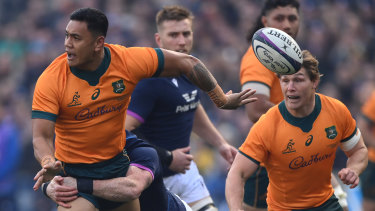 Rugby was now his priority, even if he didn’t feel he could crack the big time until a few years later.

“Even up until 20s, I didn’t feel like I was a good rugby player,” Ikitau said.

“I knew I had potential, but I never really believed in myself. It probably wasn’t until I started playing NRC, against men, rather than boys my own age, where I started to believe.”

The Wallabies believed in Ikitau from almost the first moment they saw him play.

Coach Dave Rennie called the promising centre into his squad last year based off seeing less than 80 minutes of total game time.

Selectors value his footwork at the defensive line, his left-footed kicking game and, critically for outside centres, his defence.

After a few quiet Tests to start his career, the returns of Quade Cooper and Samu Kerevi at five-eighth and inside centre, respectively, saw Ikitau blossom.

But with that pair now unavailable Ikitau was one of the Wallabies’ shining lights in the 15-13 loss to Scotland and will look to replicate that form against England and Wales, with Rennie’s side still hopeful of emerging with a positive win-loss ratio from their European tour.

“The first couple games, I guess it was something I wasn’t used to, playing international footy. More reps, more games, I felt more comfortable,” he said.

“Having Quade and Samu there has helped a lot. They have given me the licence to play my game.”

Ikitau understands that the licence with which he has played during his rookie season with the Wallabies must be earned.

He has had that fact drilled into him by his father, who has called him on every morning of every match of his professional career.

“When I played against the Springboks in Brisbane and scored two tries, the first thing dad said to me after the game was ‘stay humble’. Stay humble and keep working hard,” Ikitau said.

“They keep me grounded. Dad has always been there, helping me with my footy. He took to my games, coached me in the car on the way to games and if it wasn’t for my dad, I wouldn’t be here.

“It’s continued on until this day. He calls me before every game and tells me to focus on my defence and being physical.

“I know what I can do in attack, so he’s always making sure I focus on defence.”