Home » Rugby » The long and short of it: Storm’s attack will be the deciding factor

Attack has been the hallmark of both these sides but the weather conditions expected for this Sunday's NRL grand final play straight into Melbourne's hands.

The key to beating Melbourne is moving the ball but, with rain and howling winds forecast, that's going to be tricky for the Panthers. 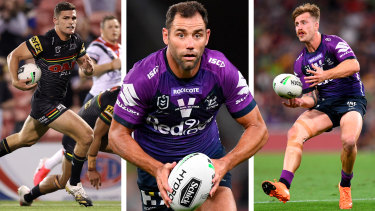 Then you have Cameron Munster and Cameron Smith kicking down the left-side where Josh Addo-Carr and Justin Olam will be racing each other down field to pin Brian To'o on his own line.

For the next two or three plays, the Storm will fly out of the defensive line and suffocate Penrith down their own end.

HOW PENRITH CAN WIN
So, with that in mind, the real key to Penrith winning are their wingers. Mansour and To'o need to have the game of their lives.

They need to run more than 200 metres each, getting the sets rolling, getting the props moving forward so they can all give Nathan Cleary a strong platform to kick from.

This is the biggest test of Cleary's career so far because he's going to see nothing.

Because the Storm control the ruck so well, when he looks up he won't see players out of position. He might only get three or four chances per half to get over the advantage line and put pressure on the Storm.

So he's got to hold his nerve and be patient.

We all know about Penrith's lethal left-side attack with Luai jumping around with his speed, footwork and agility, playing short to Viliame Kikau, a genetic freak, or getting the ball to Stephen Crichton.

But Isaah Yeo has become just as important to this team.

He does for Penrith what Victor Radley does for the Roosters and Jake Trbojevic does for Manly. He's an extra halfback in the line, which frees up Luai and Cleary on the edges.

He must play 80 minutes for Penrith to win. When he left the field against Souths, his team noticeably dropped.

Perhaps the best thing going for these young Panthers is COVID-19. It means they can prepare for the biggest game of their lives without any distractions.

Sometimes, the key to winning the grand final isn't the match but handling the week.

In 1997, I was in hospital all week with a punctured lung. But it's become a part of rugby league folklore how we approached the 2001 decider feeling calm and composed. When we saw how intense and nervous Parramatta looked at the 2001 grand final breakfast, we knew we had a great advantage.

You have to keep your routine as normal as possible but that's difficult with the media and fan interest and the various functions you have to attend.

You can quickly get to Sunday morning and think, "Shit, I haven't even thought about how I'm going to play".

It's a blessing for Panthers coach Ivan Cleary that no such distractions exist this year.

PLAYER TO WATCH
I'm expecting Cameron Munster to be the dominant force of this grand final.

He was quiet in the preliminary against Canberra because he was coming back from a knee injury. 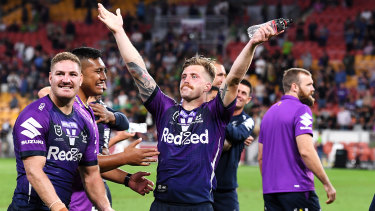 Back on the big stage … Expect Cameron Munster to have a big game on Sunday.Credit:Getty

But the wet conditions will actually suit his game. His target will be Penrith back-rower Liam Martin, who will keep coming out the line to put pressure on him.

Munster is too smart for that. He will put on a left-foot step to Martin's inside shoulder and away he'll go. 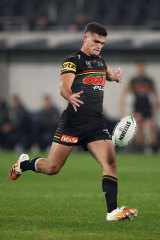 Nathan Cleary’s chip bomb will be a key weapon for the Panthers.Credit:Getty

Close to the Storm tryline, with the ball played in line with the black dot or the right post, Cleary gets the ball and stabs at the ball over the top of Jahrome Hughes with Viliame Kikau and Stephen Crichton arriving just in time to score the try.

Isolating the Storm halfback is the key with Cleary kicking at the right moment so his outside men can't get there in time to protect him.

Kikau or Crichton, who start outside of Hughes, will be impossible to stop if Cleary can land it on the spot.

For Penrith to win in the wet, Nathan needs to kick his side to victory.

THE VERDICT
The fairy tale is there to be written for Cameron Smith. Every time I see him play, it's a joy. When I commentate, I sit and watch and get caught up as a fan.

He can go out with a grand final victory – and deserves to.