Joel Selwood will be key to stopping Collingwood's lanky forward Mason Cox. So will Mitch Duncan. And Cam Guthrie.

Patty Dangerfield and Sam Menegola will be needed, too, for Jordan De Goey. 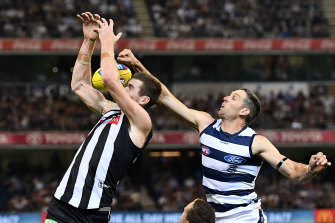 Geelong defender Harry Taylor said the key to handling the difficult size match-up with Cox and the difficult X factor match-up of De Goey is as much about the work up the field as it is in the back line.

"It starts with the midfield and the forward pressure," said Taylor, who has done well on Cox in the past.

"Their midfield is one of the best in the comp, it's a mature, robust group. And [Brodie] Grundy is an important part of that.

"So pressure up the field is key. And we have to try to get our techniques right one on one."

Cox didn't play against the Cats earlier in the year in Perth when De Goey kicked five goals and Collingwood won.

He has not had a big day out against the Cats but at his size and with his marking capability he can be a difficult proposition for opponents.

Making sure the ball is not delivered to him the right way is the first step in defending against Cox. Making sure he cannot run on to the ball the right way, where his superior reach makes him hard to defend, is down to the defenders' nous and craftiness.

"With a player who is 211-centimetres you need to be able to work angles and negate his influence,'' Taylor said.

"I watched last week as a defender thinking who am I going to get and Cox, Josh Kennedy, Jack Darling, Brody Mihocek – they all had good nights. They had a better night than me, I didn't get much sleep that night.

"I don't sleep very well before a game and that hasn't made me sleep any better."