Despite declaring earlier this year he would never coach against Australia, former Wallabies coach Michael Cheika has finally linked up with Argentina ahead of next month’s Rugby Championship.

The Pumas shared photos to their social media channels of Cheika alongside head coach and former Wallabies assistant Mario Ledesma at the Sydney Academy of Sport and Recreation in Narrabeen. 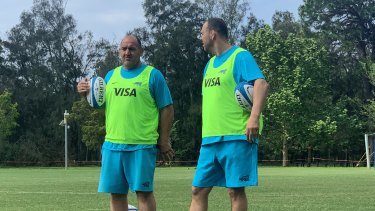 Argentina arrived in Australia earlier this month for what was expected to be a four-team Rugby Championship but South Africa’s late decision to pull out due to player welfare reasons has halved the number of games in the tournament from 12 to six.

Instead of six-double headers across six weeks, just one match will now be played each Saturday.

The Pumas, ranked 10th in the world, begin their campaign against the All Blacks on November 14 at Bankwest Stadium, before taking on Australia the following Saturday in Newcastle.

Cheika, who exited stage left after last year’s World Cup, answered a call from Ledesma to help Argentina given The Rugby Championship is taking place solely in Australia. He has now finished his commitments with the Sydney Roosters and will be looking to find ways to see where the Wallabies are vulnerable under new coach Dave Rennie.

"The fact that Michael (Cheika) can now be at the training venue and in contact with the players is great," Ledesma said. "He is very enthusiastic about the team, he transmits lots of confidence and belief. He is very eager to join the group and players will be able to take advantage of him full-time. He will prepare individual things with the players, so that will be great for the team".

In an interview earlier this month, Cheika explained why he felt compelled to take up an opportunity with the Pumas.

"For me to have an opportunity, even though I'm not the head coach, but to help them and help this happen in Australia is definitely worthwhile,” Cheika told rugby.com.au.

"I just think it's the right thing to do and have some fun as well. I love the Argentinian mentality and they've had such a great history around the game. 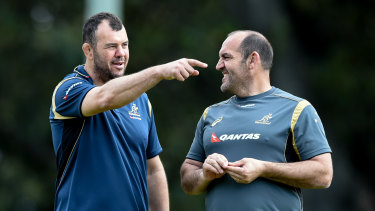 Cheika and Ledesma during their Wallabies days in 2015. Credit:Brendan Esposito

"To have the chance to help them out, especially in Australia, my home country, and make this championship happen you couldn't ask for much more. What an opportunity."

Ledesma worked under Cheika at Stade Francais and then at the Waratahs in 2015.

The pair were part of the coaching group that helped Australia to a World Cup final later that year.

Ledesma left the Wallabies set-up in 2017 before coaching the Jaguares in Super Rugby and then the national side.

Argentina have organised a warm-up match against the Waratahs this Saturday afternoon at TG Millner but the match won't be open to the public.

The plan is for the Pumas, whose players have barely had any rugby under their belts due to COVID-19 restrictions in Argentina, to have three friendly matches before taking on New Zealand.

"The friendlies are essential," Ledesma said. "Having the possibility to play three games before New Zealand seems like little preparation but for us it is very important."

England return to action against the Barbarians on October 25

‘Please AFL, give us some information’: Clarkson’s plea on list sizes