Home » Rugby » The Reynolds effect: How Foran can emulate rival and reboot Titans

Kieran Foran has admired the way rival playmaker Adam Reynolds has rejuvenated his career in Brisbane and hopes to follow suit when he links with the Gold Coast next year.

Like Reynolds, Foran will be squeezed out of a club he loves at the end of the season and tasked with adding some experience, old-school toughness and consistency to a Titans side with good forwards but inexperienced halves.

Foran, who like Reynolds is 31, will link with the Titans on a two-year deal worth about $750,000 after Manly could not accommodate him in their salary cap for next year.

Earning just under $300,000 this year, Foran has no intentions of quitting the northern beaches club early, nor any desire to hand to his beloved No.6 jersey to incoming five-eighth Josh Schuster. In fact, he is backing the Sea Eagles to go all the way before he departs.

As he prepared for Friday night’s clash against Reynolds and Brisbane at Suncorp Stadium, Foran told the Herald: “I don’t know Adam personally, but he’s been such a great player for such a long time. You can see the impact he has had with his footy nous and just his ability to take control of a game with his direction and kicking game up in Brisbane.

“They’d be so happy he’s signed with them because he’s made a world of difference to their side. I’d like to think I can do something similar on the Gold Coast.” 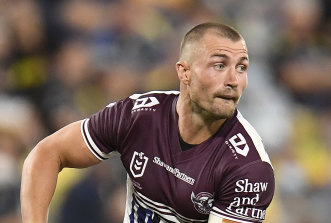 Foran and halves partner Daly Cherry-Evans have often spoken about how the New Zealand international has always played his best football at Manly and alongside the Queensland skipper.

Plenty of Titans fans will be wondering whether Foran can achieve the same level of happiness on and off the field, but the premiership winner said there was enough stability in his life to tackle the next challenge.

“I’m really comfortable with where I’m at as a person and footballer, I welcome change and growth, and the move to the Titans will be just that,” Foran said.

“I’d been pretty patient with Manly. The reality was I had been off contract since November last year, there was nothing happening, and when you’re without a job for the following season, it can play with your mind and become a distraction. 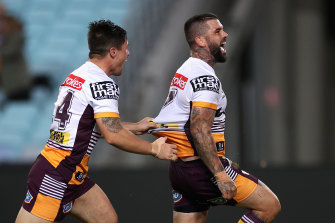 Adam Reynolds has sparked Brisbane to life since being squeezed out of Souths.Credit:Getty Images

“I have a wonderful relationship with Dessie [coach Des Hasler] and Manly, and if they were in a position to keep me they would have.

“The dream now is to win a premiership before I leave.”

Foran said Manly can match it with the best sides in attack, but need “more resolve and resilience in our defence”, and the ability to “put the foot on the throat” of an opposition, which front-runners Penrith and Melbourne consistently do well.

Schuster is injured but will bide his time in the back row for the remainder of this season, and Foran said the club would be in good hands when he took over next year.

“He’s an enormous talent; he’s come through the juniors as a five-eighth and been earmarked as the club’s long-term five-eighth,” Foran said. “I have a huge opinion of him as a bloke and player, and he will do a wonderful job.”