Meg Rankin first went to the footy as a child with her mum, Joan Skerry.

Both are Melbourne Demons tragics. Robbie Flower was an early favourite, Todd Viney a later one.

Meg never gave her daughters Emily, 13, and Lucinda, 11, a chance to support anyone else – they each made their first visits to the MCG three weeks after birth.

With the Demons struggling and with husband Trav supporting the Bombers, Meg used to tell her girls to cheer extra hard for each goal and in lean years assured them that the Demons had still won – at least until they could read the scoreboard. 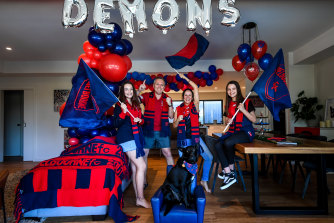 Trav and Meg Rankin with kids Emily (left), Lucinda (right) and dog Stella in Melbourne colours ahead of the grand final. Credit:Justin McManus

Her girls asked why they didn’t play the club song after those games, and she told them it had already been played at the start.

Those memories are partly why watching each Demons win on television and singing “keep your eye on the red and the blue” has been the centrepiece of the family’s week during the lockdowns of 2021.

Each win and each week has been hard-earned for the family and their football club as the Demons chase their first premiership since 1964.

“There was that element of daring to dream but it’s hard when you are a Melbourne supporter to really believe we are the real deal,” Meg said.

“Once we started going into games and not starting well but still winning games, it felt right. We’ve just loved this season. It’s been the silver-lining of our lockdown.”

In recent years, Trav has joined them as a Demons fan, proving Michael Hibberd and former chief executive Peter Jackson haven’t been Melbourne’s only Essendon recruits.

“That whole [supplements] saga ruined footy for me,” Trav said.

“I fell out of love with it but Meg and the girls were still going to the footy so I would tag along. My grandmother was a Dees supporter. Before you know it, I’m a rusted on Demon now.”

For about 15 years, Meg and later her family have had reserved seats at the MCG just behind Melbourne’s interchange bench, and they would usually head to one interstate game as well.

But the past two years have largely stripped them of those experiences. Meg estimates they have attended five or six games, including the Anzac Eve game this year.

They miss the ritual and the people who sit around them, as those fans haven’t changed even as the Dees cycled through different players and different coaches.

“The people alongside us were with me while I was pregnant and after a one or two-week absence I introduced them to the girls,” Meg said.

“I would feed the girls and put them under my seat in their little bassinets and enjoy the football.”

The Rankins have done all they can to make this a memorable grand final week, but they know it’s not the same. Meg feels this acutely as she and Joan had a joyous time at the 2000 decider even though their team was comfortably beaten by Essendon.

Stella the family dog might be the only winner, as she gets to enjoy the game with her humans.

The finals run has been emotional. The night games and curfew mean Joan can’t join them, even though she lives five minutes down the road.

“The one thing that I miss about being at the ’G is just that togetherness and the shared joy that you get from being amongst the Demon army, and I certainly miss being with my mum,” Meg said.

“That’s been really hard. Having to watch from the couch with a curfew, not even being able to watch it with friends has been really difficult.

“So not being able to watch the game together with mum and walk home or anything like that has been hard. She can’t really have visitors at this stage so we are not able to share this.”

Like so many Demons fans, the preliminary final win over Geelong brought out joyous celebrations and some tears of joy.

“Mum was in tears and she could barely look while Emily, dad and myself were jumping around the living room,” Lucinda said.

“It was quite intense but happy.”

Jack Watts and Jack Viney have been two family favourites among the Melbourne players, while Emily is a fan of Jayden Hunt and sports the same headband as the midfielder.

While the Rankins wish they could be watching the match from the stands, they will make the most of Saturday night’s grand final.

“It’s been a very, very long wait for this moment and even though we are on the couch and under curfew, we will still have a fabulous time,” Meg said.

“We are so proud of them and they have provided the silver lining for us this year.”

Many Western Bulldogs members are stuck in Melbourne and can’t take up grand final tickets for this year’s decider at Optus Stadium in Perth.

Those who can have been sharing their membership barcodes with family or Bulldogs fans in WA.

Louis Nardella is one of those lucky fans after his Melbourne-based cousin and her partner shared their barcodes with him.

Nardella grew up in Sunshine and has followed the Bulldogs all his life, including after he moved to Western Australia to work as an auto electrician in the mining industry.

His interstate membership doesn’t include access to grand final tickets but theirs did so last week he joined the online ticket sale. 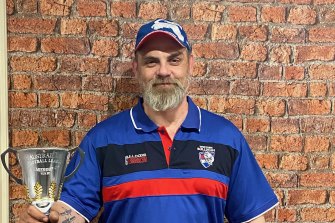 “I was under a truck at work with two phones,” Nardella said with a laugh.

“I got in there within three or four minutes [and got the tickets]. It was one of the best days I’ve had since we won the 2016 grand final.”

Nardella plans to take his neighbour, another keen Bulldogs fan, with him to the game.

“I know most of the fans will be back in Melbourne but I’ll be screaming for the lot of them on Saturday.”