Siosifa Talakai will line up opposite childhood friend Keaon Koloamatangi with their seasons on the line after a pivotal summer spent dragging each other up Coogee’s infamous “stairs of death”.

Cronulla’s finals’ second chance sees Talakai pitted against his junior Rabbitohs edge partner Koloamatangi among plenty of familiar faces, but none more so than his off-season training partner.

Talakai’s fear of needles saw him hesitating over the NRL’s COVID-19 vaccination mandate and unable to train with his Sharks teammates.

Road runs and solo park sessions kept the NSW Origin centre on track ahead of his breakout 2022 campaign, along with gruelling weekly laps of the 210-step staircase in south Coogee.

Player-manager Tyran Smith has been running the summer sessions with players including Isaiah Papali’i and the Watene-Zelezniak brothers for years, cracking the whip as Talakai and Koloamatangi slogged it out. 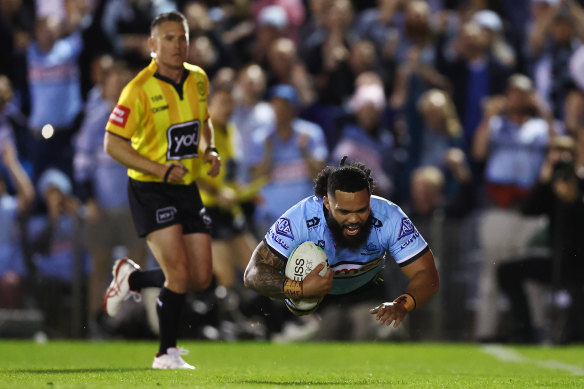 “We’d be neck and neck … at the back of the group,” Talakai laughs.

“Saturday mornings, my manager’s got a few players and he gets everyone together and there’s 30 or 40 kids that come along as well on the staircases going up and down.

“Keaon’s a quality player and he’ll be hard to contain on Saturday night, but it’s do-or-die, and I’ll do whatever it takes.”

Talakai still lives in the same Mascot suburb he grew up in, playing alongside Koloamatangi and Cameron Murray for the Mascot Jets and into the Rabbitohs SG Ball ranks.

His six-year-old son Tevita is a South Sydney “fanatic” and a Sharks win at Allianz Stadium will see Talakai “giving it to him” across the dinner table.

Talakai’s sacking by the Rabbitohs in 2018 is a tale he’s told often, the wake-up call he needed before finding his way to Cronulla via a stint with Newtown Jets while working as a garbage man.

His rise to NSW Origin honours has seen his market value go the same way but Talakai is loath to look back on the best year of his career given where he’s come from already.

“I’d rather not look back because I get complacent and the last time I got complacent I got sacked,” he says.

“My manager told me quite a few years ago that when you’re going good a lot of people see that, but when they talk about you, that’s when you need to be even better.

“A couple of years ago I would’ve said a Souths game [held significance]. But I’m done with Souths and I’m a Shark now.”