It has been 1692 days since the Wallabies’ last game against France, which ended in a 25-23 victory for Australia in Paris.

With the help of rugby statistician Kate Lorimer, we examine how the first Test of 2021 might play out for the men in gold and their French rivals as they look to climb back up the world rankings. The match begins at 8pm (AEST) on Wednesday evening at Suncorp Stadium and will be shown on 9Gem and Stan Sport. 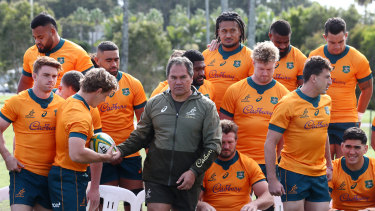 Can France’s next generation cause more Aussie heartache?

Wallabies Angus Bell, Lachlan Lonergan, Harry Wilson and Noah Lolesio all ran out for Australia in the final of the 2019 World Rugby Under-20 Championship.

Wilson and Lonergan scored two of Australia’s three tries on that day two years ago in Argentina. Can they do it again? 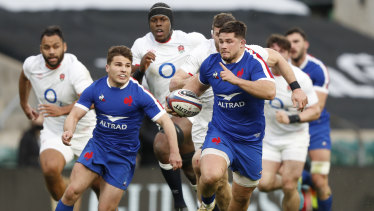 France finished runners-up to Wales in the 2021 Six Nations.Credit:AP

While only nine of France’s 23 players appeared in the recent Six Nations, this is a side with genuine flair.

In the Six Nations, France scored 18 tries, the equal second most of any team alongside Scotland, and two less than winners Wales (20).

France chalked up the most offloads of any team (46) and made the second-most tackle breaks (130).

Australia’s defence will need to be sharp from the outset, particularly during early phases. France scored 44 per cent of their Six Nations tries from lineouts, while 72 per cent of their tries came within three phases of possession.

The scrum will be a major weapon for the visitors. They won 96 per cent of ball from their own feed (highest of all teams) in the Six Nations and managed five penalties when the other team had the feed.

However, Australia’s wrecking ball prop, Taniela Tupou, has got the chance to play France and could prove a handful with the game on the line in the final 20 minutes.

The Wallabies won their last match against France 25-23 at Stade de France in November 2016 but were outmuscled at scrum-time.

Both teams will be eager to improve their discipline, while the Wallabies should be aiming to strike early. France conceded 39 per cent of their Six Nations points in the opening 20 minutes of matches.

Michael Hooper: His presence was sorely missed at the Waratahs this year and he will line up for his 100th start in a gold jersey from 106 Tests. Hooper is eyeing a 50th victory for Australia and has not played France since 2014.

Noah Lolesio: Had a debut to forget in Sydney last year against New Zealand and has less than a full game of Test experience under his belt (79 minutes). In the absence of James O’Connor, Lolesio’s goal-kicking will be super important, as will his playmaking. The Wallabies No.10 had the second-most try assists in Super Rugby AU behind O’Connor. 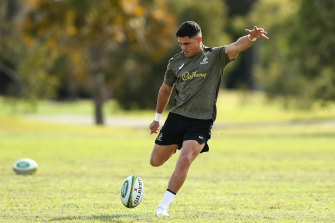 Wallabies No.10 Noah Lolesio has earned his second start at Test level. Credit:Getty

Jake Gordon: The NSW halfback has made a remarkable comeback from a knee injury to start in his first Test since the 2018 Italy fixture on Australia’s spring tour. Gordon has never played with Lolesio, so it is important their combination flourishes from the get-go. The 9-10-12-13 combination of Gordon, Lolesio, Matt To’omua and Hunter Paisami lacks cohesion and could be exposed in the first outing of 2021.

A total of 14 Australian players featured in the Wallabies’ only win last year – against the All Blacks in Brisbane.

Coach Fabien Galthie has named seven debutants in his match-day 23 – the most by a French side against Australia since 2008, when eight received their first Test caps.

Damian Penaud: France’s winger scored three tries in the Six Nations and made the most line breaks (five) in his side.

Anthony Jelonch: Has been made skipper in just his ninth Test appearance. Serge Blanco was the last French captain to beat Australia in Australia, but did so with 77 Tests under his belt.

Arthur Vincent: The team’s outside-centre led France to their U20s World Championship title in 2019 against the Junior Wallabies.

The bookies didn’t put up markets until Monday but have the Wallabies ($1.30) as firm favourites against the northern hemisphere outfit ($3.55).

What are they playing for?

Trophee des Bicentenaires. These two teams first played for the trophy in 1989. Australia hold it after their win in 2016.

Who is in charge?

Kiwi referee Brendon Pickerill has the whistle for this match and will be assisted by Australians Nic Berry and Damon Murphy. New Zealander James Doleman is the TMO.

Watch game one of the Wallabies v France Test series this Wednesday night with extended coverage, ad-free, live and on demand on Stan Sport from 7:15pm and also on 9Gem from 7:30pm AEST.