Home » Rugby » There are no Indigenous NRL coaches, but historic decider shows change on way

There’s an old saying which gets tossed around a lot these days: you can’t be what you can’t see. It’s mainly used to describe the growing spectre of women’s professional sport, and the exposure being created for young girls to have a path into the future.

When Dean Widders travelled to Newcastle last month, his Parramatta team winless after two rounds of the NRLW season, he walked towards the away dressing room and found a familiar face: the opposition coach.

Ronnie Griffiths didn’t need to be there. But he embraced Widders, knowing the rough start he’d had to the season, and they reminded each other you can’t be what you can’t see.

“I found that really good,” Widders says. “That’s the sort of friendship we’ve got. I’ve known him for a long time. I’ve played against him at the Koori Knockout, our families have known each other for a long time and then we coached together in the All-Stars in 2016.

“This week we’ll go up against each other, but there are other things we’re achieving because by coaching our teams we’re paving the way for other Indigenous fellas.”

They’re too proud and too humble to admit it, but the cultural change is a storyline almost as big as the Knights and Eels playing in their first NRLW grand final. 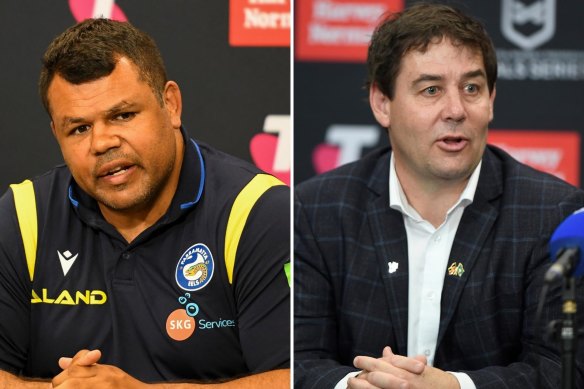 Dean Widders and Ronnie Griffiths are breaking down barriers in the NRLW.Credit:NRL Photos

Griffiths and Widders are blazing the way for First Nations coaches, who have long been underrepresented compared to the playing ranks.

Until last year, Griffiths thought he identified as the only known Indigenous coach working as part of the support staff for an NRL team. He left the Tigers under former coach Michael Maguire to take on Newcastle’s NRLW role in a competition which has proved a launching pad for Indigenous coaching credentials (Jamie Soward also coaches the Dragons).

“I’m willing to put myself in the shopfront window for the next generation of coaches that are coming through because that’s what it’s about,” Griffiths says.

“If we can provide opportunities for them, then we’ve done our job. Opportunity leads to success, but where do you get the opportunity? I had a lot of support along the way, but I went and searched for an opportunity and it came after that.”

Both men speak of the stereotype attached to Indigenous players.

How many times have you heard one referred to as an instinctive or off-the-cuff player? Griffiths and Widders want to change the perception that First Nations players are just born with a gift, rather than relentlessly honing their craft.

“Players like [Josh] Addo-Carr had to train [his] speed to the level he’s at,” Widders says.

“Cody Walker had to practise and practise and practise to the point where he’s great at reading the game and watching mannerisms of players so he can read defensive lines. He sees different momentum swings and patterns in games. We put a lot of work into that stuff. It’s not something where we just turn up on Sunday and run the footy.

“There needs to be more recognition we come with strategy and a mindset to build tactics into a game. You add work ethic to that and I think that’s underappreciated with our mob, and why we haven’t broken into the ranks of NRL [coaching].”

Walker has openly discussed his plans to forge a post-playing career path in coaching. He knows the significance of having Griffiths and Widders in the coaching box on grand final day, though he would have loved to have been playing himself in the match directly after.

After coaching against each other on Sunday, Griffiths and Widders are a chance of reuniting on Monday, when they are expected to commentate the women’s final at the Koori Knockout in Nowra.

“I hope Ronnie feels proud two of us can do this together.” Widders says.

“I’ve got no doubt there’s barriers we’ve got to break down. There are difficulties and that’s why guys like myself and Ronnie and the other guys who are coaching in the NRLW are so important at the moment. We’ve got to make sure we can leave something for the next generation to build on.

“We might not be the first Indigenous NRL coaches, but hopefully we can build a platform where a Cody Walker is coaching an NRL team one day.”

Watch the NRL grand final exclusive, live and free on Channel 9 and 9Now.

Under-strength Panthers march on against Raiders