Home » Rugby » ‘There’s still a bit in the tank’: Jones not done with Rugby World Cup

England coach Eddie Jones has vowed that next year’s World Cup will not be the last of his career.

Jones’s contract with the Rugby Football Union will come to an end after the tournament in France but he has not ruled out coaching other sides at the World Cup. He won it with South Africa as an assistant, and, as head coach, took England and Australia to finals. He also won three matches with Japan in 2015.

The 62-year-old’s appetite to continue coaching at the very top has not wavered. “Definitely not. It won’t be [my last],” Jones said. “I can’t guarantee you that, but I don’t think it will be. I reckon there’s still a bit to do. There’s still a bit in the tank.”

It is only natural to make comparisons between where England sit now, with less than 12 months to go to the World Cup, and Jones’s first four-year cycle with the side. A series win in Australia over the summer eased the pressure after another disappointing Six Nations in which England won two out of five matches.

There remains a sense that Jones is yet to fully reveal his hand in terms of tactics, happy to bear the brunt of Test defeats and criticism from all corners if it means that England’s top-secret plan is preserved until their opening game against Argentina in Marseille.

Everything almost went perfectly in Japan, that is until England were hammered in the 2019 final by South Africa, and the doubts still linger. 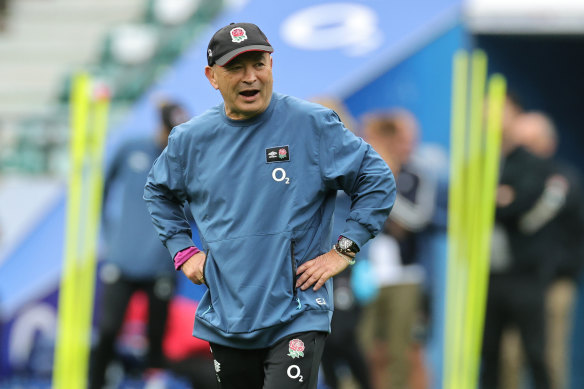 Eddie Jones has been to the Rugby World Cup as a head coach with Australia, Japan and England.Credit:Getty

Mental fortitude in the heat of the action is arguably more important than ever, given Jones’s comments regarding the adversity players now face on the field from refereeing decisions.

“I’ve never seen such volatility in the game or around the officiating of the game. I don’t think that’s going to change. I think the game’s getting so difficult,” he said. “At some stage, they’re going to have to almost break it and fix it again. We’ve probably gone as far as we can refereeing the game as it is now.”