Home » Rugby » ‘This club’s given me everything’: Why Hynes didn’t want to leave the Storm

Storm utility Nicho Hynes has revealed he was keen to stay at the Storm and telling coach Craig Bellamy he had signed with the Sharks was the hardest moment of his young career.

Hynes, 24, agreed to join the Sharks earlier this month on a three-year deal after looking for a club where he could start more regularly. 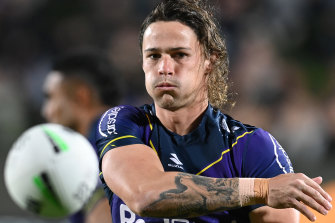 Hynes signed a three-year deal with the Sharks earlier this month.Credit:Getty

Hynes said the signing came as the result of a conversation with incoming coach Craig Fitzgibbon, whose vision for the club was similar to Bellamy’s.

The youngster will be coming in for a rebuild, with trio Shaun Johnson, Josh Dugan and Aaron Woods all told their services will no longer be needed at the Shire for 2022.

“To the media, (the Sharks deal) seemed to happen very quickly, but Fitzy was in contact with me for a couple of weeks there,” he said.

Hynes was also being pursued by the Raiders and Warriors.

Hynes said it was tough to meet with the Storm bosses to let them know of his decision to join Cronulla.

“It got a little bit emotional, as it would, but they knew that they probably couldn’t keep me because I wanted to be a starting player. I was dreading it, but I’m glad I did it with them because I really wanted them to know before the media found out,” he said.

“They did want to keep me and I had a lot of conversations with Craig and Frank (Ponissi) about them wanting to keep me.

“But we were all honest with each other from the start and they were happy with me going and speaking to other clubs and seeing what the best opportunity was.

“I looked at Craig as a really big role model to me. He’s been unreal for me and my footy. It’s easily one of the toughest things I’ve had to do.”