Home » Rugby » Thought the men’s fixture was compromised? Try AFLW on for size

This season, for the first time in AFLW, there are 18 teams in the competition. But with only 10 rounds, it’s down to the fixture to make a fair home-and-away season.

For season seven, the AFL, to its credit, has designed a fixture that will feature competitive matches. In curating it, ladder positions from season six were considered, as well as player exodus, recruits and a team’s history in the competition. For example, last season’s top three teams play one or two expansion teams and at least four teams from the previous season’s top six. 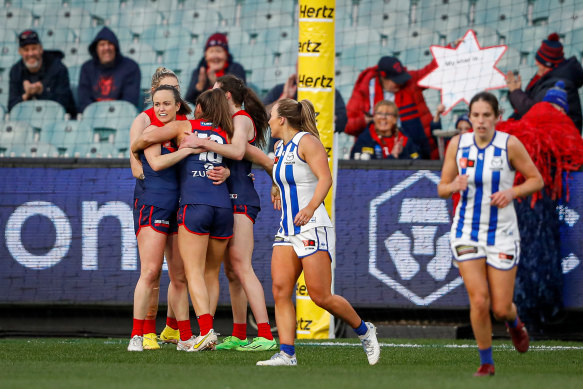 The Demons, who are in the hunt for a premiership this year, have never faced Geelong.Credit:AFL Photos

It’s impossible to cover every base this season, with four new teams in the competition, the talent pool stretched and copious player movement. For example, Fremantle, who finished fifth last year, lost a significant number of players to expansion and are now struggling to put some good football together. Geelong, who finished 12th last season and have recruited well, have the bonus of playing three expansion sides. Their fast start to the season, with wins against Richmond and Fremantle, put them in a really good position to challenge for finals.

Competition equalisation through a well-thought-out fixture is important, but it may come at the expense of a quality side missing out on finals. I expect we will see a lot of teams on the same number of wins, with percentage critical for each game. Percentage could hurt a team at the end of the year, denying them a double chance within the top four or a finals position. With a home grand final up for grabs, the stakes are high.

This focuses the discussion around growing the competition to more than 10 rounds. How can a premiership be determined if you only play 55 per cent of the teams in the competition? Also, one team may not play another for many seasons; an example is Melbourne, who haven’t played Geelong since they came into the competition in 2019. I understand that a complete competition is an important milestone for our game, but the next focus should be growing the number of rounds we play each season. Currently, a limited number of games means there is absolutely no room for error at any stage throughout the season. You can’t afford to drop a game because your contrived fixture then presents you with some harder matches.

In the men’s game, all 18 teams play each other once, so already the competition is equalised without manufactured match-ups. However, the additional five rounds, in the 23 round home-and-away season, proves how much the fixture can play a part in a team’s finals hopes. As we saw recently in the men’s competition, Carlton were denied a finals spot in the final round. They played Giants, Adelaide, Brisbane, Melbourne and Collingwood twice, three of them top-four teams – a big ask for a side that finished 13th last season.

We have tried the conference system in the women’s game to equalise the ladder and possibly provide a greater probability of ensuring the best teams make it into the finals. I don’t believe that’s the solution because it takes our game away from tradition.

In my opinion, the only solution is that we play each team once, at least.

In the meantime, the old adage has never been more true: every goal you kick counts and every one you save is worth two.

Ratten: Hill criticism had been unfair

Rabbitohs in the hunt for top-four spot after thumping Warriors