Dane Gagai was forced to use his body as a protective shield over teammate Selwyn Cobbo as tempers flared in the most brutal start to a match in State of Origin history, with three players concussed in as many minutes on Wednesday night.

Rookie Queensland winger Cobbo, teammate Lindsay Collins and NSW forward Cameron Murray were all ruled out of the series decider after incidents in the first four minutes, prompting Maroons great Cameron Smith to describe it as “warfare”.

Gagai went from a hero trying to preserve a teammate’s health to villain in the opening minute of the second half when he threw a flurry of punches at NSW rival Matt Burton during a wild fight in back play. Referee Ashley Klein sent both players to the sin bin.

The carnage in the opening minutes was punctuated by Cobbo’s friendly fire with teammate Patrick Carrigan, which rendered him unconscious as players from both teams rushed to a melee right around him before Queensland’s famous 22-12 win at Suncorp Stadium.

Realising the gravity of the situation, Gagai hunched over a vulnerable Cobbo to protect him as rivals shoved and grabbed each other. It took several minutes for medicos to stabilise an unconscious Cobbo, who eventually came to and was driven from the field sitting on the back of a medicab in a neck brace.

Cobbo, 20, was the first Maroons player to be withdrawn from the game due to concussion, only a minute after NSW’s most versatile forward, Murray, stumbled out of the first tackle his team had to make from a Corey Oates kick return. 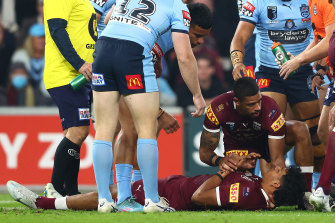 But the chaos didn’t end there.

Collins came spearing in at Daniel Tupou. His head crashed into the giant NSW winger and his Roosters teammate, which also prompted him to be taken from the field immediately.

Less than four minutes had expired on the clock.

“With tackling techniques that have changed over the years, they don’t like to drive in so much with their shoulders, it is all about control,” Andrew Johns said in commentary. “This is … this is a throwback to the ’80s. That’s three off.”

A series which started with concussion controversy as Blues lock Isaah Yeo stayed on the field in game one after seemingly stumbling after the first tackle of the series ended on a similar note.

The NRL’s independent doctor in the remote bunker to rule on potentially concussed players had never been so busy, with the Maroons forced to play with only two fit players on the bench for 76 minutes.

The rarely-used 18th man, introduced by the NRL to allow a team to activate a fifth interchange player if they have three players ruled out of a game due to head knocks, was almost used. Tom Flegler would have walked into Suncorp Stadium thinking he was next-to-no chance of featuring in the series decider. He almost did.

If the concussion calamity of the opening few sets was a throwback, then what was the fight between Gagai and Burton?

The Queensland winger took offence to Burton seemingly bumping into Kalyn Ponga, and shoved the Blues centre before both sent a flurry of punches at each other with Tino Fa’asuamaleaui grabbing Burton as Gagai went to town.