Soon after the season restart in June, Richmond CEO Brendon Gale had to tell triple premiership coach Damien Hardwick to place his trust in the expert's response to COVID-19 otherwise his negativity could derail the Tigers' season.

Gale's blunt message came after Tiger president Peggy O'Neal had a conversation with Hardwick on the boundary line at Punt Road when his frustration at the measures the AFL had put in place to keep the season running during the coronavirus pandemic became obvious to her. 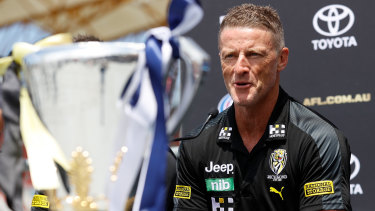 In Konrad Marshall's book The Hard Way: The Story of Richmond's 13th premiership, O'Neal has revealed that her discussion with the coach led to both football manager Tim Livingstone and Gale addressing the issue with Hardwick.

“Damien, you could tell, was just irritated. He had something that worked, and this thing was messing it all up. It might have been a matter of him not believing everything he was told, or perhaps asking, ‘Does it have to be this extreme?’ or ‘I’ll believe it, but you’ve got to prove it to me’,” O'Neal said.

"He just had to be more positive."

At that stage Hardwick had ripped COVID-safe posters off the walls inside the club and was questioning AFL decisions made to safeguard the competition which saw players have to train in small groups and football department staff segregated from the rest of the club.

And the Tigers performed poorly when the season restarted in June.

In the media conference immediately after the Tigers' brilliant premiership win over Geelong at the Gabba, Hardwick admitted his attitude had been wrong and it took words from the club's leaders to turn him around.

He also admitted the club's move to Queensland, which came after the club played Melbourne at the MCG in round five, could not have come at a better time as it allowed the group to come together as one.

While their performance rebounded on the field with Richmond winning 13 of the 16 games they played while based on the Gold Coast, their initial response to the circumstances they faced set the scene for the club to be involved in a series of high profile incidents both on the field and relating to the AFL-imposed protocols.

After Sydney Stack and Callum Coleman-Jones were sent home after being involved in an early morning altercation in Surfer's Paradise, Gale admitted the club's brand had been tarnished and they needed to work to restore their supporters' trust.

In the book both Gale and Livingstone empathised with Hardwick's response although they could not allow it to fester.

"Look at his background," Livingstone said. "He’s an accountant, and he looks at the numbers and the statistics and the logic behind it, and he didn’t see things adding up, and he found it frustrating."

Gale, who rejoined the Tigers' hub in September for their relentless ride towards their third premiership in four years, would later tell Hardwick he was coaching magnificently and was in form.

Marshall's book captures Hardwick's influence on the group as he tells stories before each challenge to push the team to greater heights.

It also reveals that the coach developed a theme for the players before the season began which was, fortuitously, relevant to what eventuated with Hardwick introducing the group to a Finnish concept Sisu, which values grit, resilience and tenacity above all else, a word that helps Finland endure their harsh, unrelenting climate.

It is the third book from Marshall about Richmond with The Age writer also writing Yellow & Black in 2017 and Stronger & Bolder in 2019 when the Tigers also won flags.

Published by Hardie and GrantThe Hard Way: The Story of Richmond's 13th premiership is available in bookshops on December 10.