Come back for updates throughout the day.

Richmond hopes Dustin Martin can prove his fitness at training on Wednesday, with the Tigers great battling illness and in doubt for Thursday night’s blockbuster against Carlton.

Martin missed training on Monday, having fallen ill with what coach Damien Hardwick said was “a bit of a lurgy”. The three-time Norm Smith medallist was not at the club on Tuesday.

Richmond senior advisor Neil Balme was hopeful Martin would return on Wednesday and join teammates for a light run, ensuring he lines up at the MCG on a night the Blues will celebrate Patrick Cripps’ 150th match. 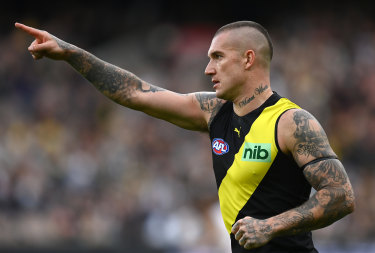 The 7-5 Tigers have won five of their past six matches, their only defeat in this period to the Swans in Sydney when they squandered a five-goal buffer, and they now appear primed to not only push for a top-eight berth but even a top-four finish.

They expect to be boosted by the return of Tom Lynch, the forward having had three weeks to recover from an injured hamstring. Forward-midfielder Kane Lambert is a strong chance to force his way into the starting 22, having been the unused medical substitute last week.

Lambert has a chronic hip injury and the Tigers are desperate to nurse him through the season.

“That was the best thing to happen to him last week. We had him just in case and didn’t have to use him,” Balme said.

Jack Riewoldt is playing with an injured finger but continues to suit up.

The two teams met in round one, the Blues ending a nine-year string of defeats with a powerful final quarter. Martin had a six-week personal break after that game.

The Blues, at 9-3, are primed to play in their first finals campaign since 2013 and have emerged as a serious premiership contender due to an attacking game plan and an ability to score from stoppages.

Midfielder Adam Cerra was forced off during the 26-point win over Essendon on Friday with a hamstring issue and is in doubt.

This is a Tigers home game, so Martin’s presence has even more value in terms of attracting a crowd of more than 60,000. Only 21,757 supporters attended last Thursday night’s match between the Tigers and Port Adelaide at the MCG, the lowest attendance for a Tigers’ home match at the venue since 2010 (COVID years aside).

Frustrated by ticketing issues and even over-umpiring, supporters appear less inclined to brave the cold and support their team in person. The poor turn-out also sparked debate as to the value of Thursday-night football in winter during a school term.

“Hopefully, we get a lot of people there to get the Thursday numbers up and going,” Hardwick said.

“Thursday nights, people are still becoming accustomed to, and this time of the year it is really, really difficult. Obviously, it’s cold, a school night, 7.20pm start is a little bit earlier, but I still maintain when the game starts at 7.50pm (on Fridays) and, I am an AFL coach, I am asleep by half-time.”

In a season when ratings and attendances have been down, the Blues and Tigers attracted 72,179 fans in round one, but that was in mid-March. 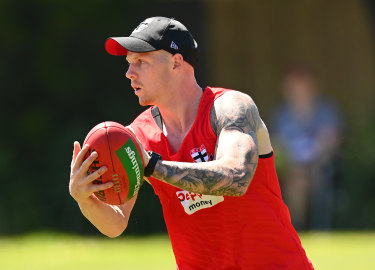 Zak Jones has been cleared of hamstring damage but will need to confirm his fitness at training.Credit:Getty Images

Meanwhile, St Kilda could be forced into three changes for Friday night’s “Spud’s Game” against Essendon at Marvel Stadium.

In what was a bruising loss to Brisbane on Saturday, draftee Mitch Owens and Daniel McKenzie were concussed and are in protocols, while Zak Jones is in doubt despite scans clearing him of a hamstring injury. However, the Saints may err on the side of caution.

“Jones will undergo a number of tests at training this week to determine his availability for this week’s match against Essendon in the second annual Spud’s Game,” the Saints said on the club website.

Hunter Clark (24 disposals) and Jack Billings (32) impressed in the VFL and are in line for a recall.

‘We shared some great memories together’: Sam Mitchell hopeful of Top End meeting with Cyril Rioli