The Melbourne Rebels and Rugby Australia are poised to re-sign Wallabies playmaker Matt To’omua until the end of 2023 but star back-rower Isi Naisarani will depart at season’s end.

It comes as Rebels boss Baden Stephenson threw his support behind under-fire coach Dave Wessels ahead of Saturday’s crunch match against the Waratahs but said no decision had been made regarding whether he would be offered a new contract beyond this year. 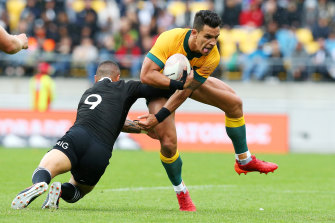 While no paperwork has yet been signed, sources with knowledge of negotiations have told the Herald To’omua is on the verge of remaining in Melbourne for another two seasons.

His management had been in talks with Japanese clubs and while To’omua was eligible to take a sabbatical in 2022, he will remain in Australia with aspirations of representing the Wallabies at a third Rugby World Cup.

The Rebels have been impressed by To’omua’s leadership since he returned in 2019 and have been seeking to re-sign him for months.

Meanwhile, Naisarani is on the verge of leaving Australian rugby, less than two years after being in Australia’s World Cup starting side.

The big Fijian back-rower was left out of Dave Rennie’s initial Wallabies squad last year but was named to attend a recent camp in Coogee.

His deal with the Rebels and RA expires at the end of the year and sources with knowledge of negotiations say he is heading to either Japan or Europe on a deal worth double what was offered in Australia.

Six or seven clubs were pursuing Naisarani, who has not played for the Wallabies under Rennie.

Both To’omua and Naisarani will line up for the Rebels against the winless Waratahs this Saturday at Bankwest Stadium with Rebels coach Wessels under pressure to produce a win to keep his job.

The Rebels need to beat the Waratahs and hope the Queensland Reds knock off the Western Force on Friday evening in order to sneak into third spot and book a preliminary final meeting with the Brumbies.

Wessels’ future is up in the air. He is off contract at the end of the season and Wallabies legend Tim Horan stirred the pot this week by saying Wessels was a “dead man walking”. However, Stephenson offered hope for the embattled coach.

“From my point of view there has been no discussion to suggest otherwise that he’s not going to be head coach for the 2021 season,” Stephenson said. “We’re committed to Dave and Dave is working his backside off.

“There has been no clear decisions on Dave’s future in the short term or the long term. It’s about us getting in the finals this week.

“The board and I haven’t made any key decisions on 2022 and beyond. Ultimately we’re probably halfway through our 2021 season. We know where we’re at.”

The Rebels have won two of their seven matches this season and will start as heavy favourites against the Waratahs, who are staring down the barrel of an eighth straight defeat.

“There’s no doubt that right across the club from the top down we have all been a little bit frustrated in recent weeks that we haven’t been able to close out a couple of those close games,” Stephenson said. “We’ve played lots of close games and good teams find a way. Unfortunately the reality is we haven’t done that. That’s something we’re working on to try and fix in the coming weeks.”