The top eight looks likely to come down to percentage as we head into the final home-and-away round of the season. Who’s in the box seat? Plus, Jess Duffin’s home farewell, Montana Ham gets her first AFLW goal and heartbreak for a Bulldog.

With the penultimate weekend of the home-and-away season done and dusted, five teams have locked in their place for finals: Brisbane, Melbourne, Adelaide, Collingwood, and Richmond.

North Melbourne and Geelong are all but guaranteed to be in the mix too, but mathematically have a tiny possibility to fall out on percentage. Eighth spot though is still vulnerable to change, with the Western Bulldogs and the Suns eyeing it.

The Bulldogs’ 32-point win against West Coast on Saturday has kept it in their hands for now, but Gold Coast could still nab it after their 27-point win over Carlton on Friday evening.

If the Bulldogs win this weekend’s clash against the Blues, they’re in the eight. However, if they lose and the Suns beat GWS by enough to boost their percentage, Gold Coast could play finals. However, the Suns trail in percentage by about 20 percentage points.

However it plays out, being on the cusp of finals is an impressive feat for the Suns, who didn’t claim a single win last season.

The Bulldogs’ win on the weekend was a bittersweet one, with forward gun Kirsten McLeod subbed out of the game in the opening four minutes due to an ankle injury in what was her return game after being sidelined for over 575 days with ongoing effects of concussion. 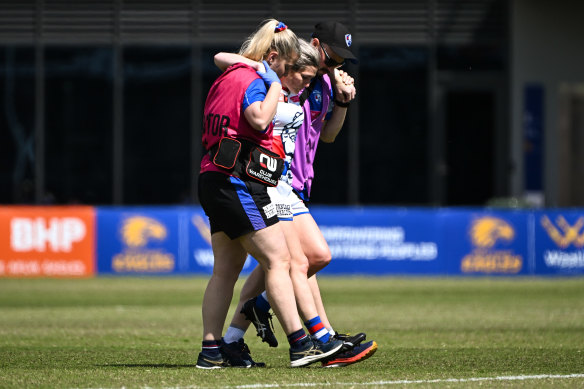 Major battle for the minor premiership

Brisbane have been in hot form all season and after their whopping 54-point win over Hawthorn over Saturday evening at Skybus Stadium, they have one hand on the minor premiership.

But Melbourne have a finger on the other side, sitting just below in second place after their thumping 41-point win over Essendon on Sunday evening, where Kate Hore booted three majors.

While both the Lions and Dees are equal on points, Brisbane rein supreme with 27.4 more percentage points, a hard margin for Melbourne to chase next weekend.

The Lions, after conceding only one loss this season to Richmond in round five, and consistently humbling teams as they claim large margins against their rivals, have made themselves at home at the top of the ladder.

The Demons could win the minor premiership.Credit:AFL Photos

They have won four games by more than 40 points, including a 73-point win over Gold Coast in round three, and last week they enjoyed a 22-point victory against reigning premiers Adelaide.

However, Melbourne have been snapping at their heels all season and their only loss came in round four. They entered the season as flag favourites and will be looking for redemption after last season’s grand final loss to Adelaide.

Also after the weekend, Lions Star forward Jesse Wardlaw is looking to take out the leading goalkicker award after kicking three majors against the Hawks and bringing her season tally to 17. The closest contenders are Richmond’s Courtney Wakefield and St Kilda’s Kate Shierlaw both on 12, with Melbourne’s Kate Hore in the mix on 11 with Lion Greta Bodey and Crow Ashleigh Woodland.

Race on for fourth spot

Richmond have leapfrogged Collingwood and landed themselves in the top four with a 43-point win over GWS on Sunday, their seventh consecutive victory. 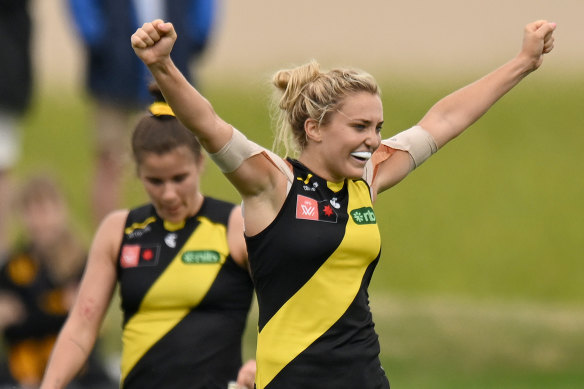 Tiger time? Richmond are in the box seat to get the double chance.Credit:AFL Photos

In a clinic that showcased their spread of talent, the margin allowed them to bump the Pies, who would have been locked in for the double chance had they beaten North Melbourne on Saturday.

Richmond are heading to their maiden finals series and are in the box seat to keep the double chance. Win against North Melbourne and they’re likely in, given they’re about seven percentage points ahead of the Pies, who have to face ladder leaders Brisbane on the road.

But if the Kangaroos beat Richmond, their superior percentage would push them ahead of Richmond and into the top four. The Tigers have won seven in a row – in fact, after losing the first two round of the season they have been unbeaten, including a win over the otherwise rampaging Lions.

Many fans will have their eyes peeled to not only the winner’s list but also the margins with final positioning in the eight will most likely come down to percentage.

No.1 draft pick gets first goal on the board

Sydney’s No.1 draft pick Montana Ham provided a shining moment in the Swans’ 14-point loss to Fremantle on Saturday when she booted her first goal in the league.

Late in the first quarter, Ham received the ball from teammate Cynthia Hamilton near the 50-metre arc and ran it straight to goal.

The 18-year-old has averaged 14.1 disposals, 5.1 tackles and 2.9 clearances a game over her seven matches, the goal now topping off an impressive first season despite a disrupted start.

The midfielder started her AFLW career being sidelined for two weeks after suffering a knee joint strain in the club’s debut game against St Kilda. She landed awkwardly after being caught in a smother when kicking towards goal, but escaped first worries of an ACL injury.

Another highly celebrated first goal was North Melbourne’s Charli Granville, who was a late replacement for Sophie Abbatangelo out with illness, and booted her first, then second, AFLW goal.

Then over in the West, West Coast’s Ashleigh Gomes got a goal in her debut, and in front of a lively home crowd.

Hawthorn vice-captain and fan-favourite Jess Duffin played her last home game in the AFLW against Brisbane on Saturday evening after calling time earlier in the week. 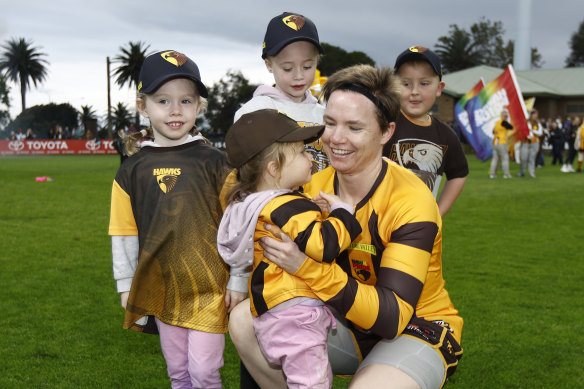 Jess Duffin ran out on to the ground with family in her final Victorian game.Credit:Getty Images

Fittingly, she booted a heartwarming goal against the Lions in the second quarter to the roar of fans, but it was the only major from her side all night.

The 33-year-old wasn’t helped by the fact the ball spent majority of the night in the opposition’s attacking half. But she still had an impact against the top-tier side and showed she’ll be missed next season.

Duffin started her career at Collingwood, then evolved into a defender at North Melbourne before making her way to the Hawks, where she’s been one of the expansion side’s most important goalkickers.

“As a footballer, you get to a time in your career when you know your time’s up,” said the inaugural player earlier in the week.

“I’ve loved every minute of being at Hawthorn. I’ve played six seasons of AFLW, and I can genuinely say this is the best club I’ve been at.”

Despite being farewelled by Victorian fans over the weekend, her last game will be against Fremantle in the west next weekend.

England's Courtney Lawes will take anything on: from rugby to Boris