South Sydney try-scoring machine Alex Johnston says he will be “touch and go” to return from a hip-flexor injury in time for Saturday’s preliminary final against Penrith.

Johnston joked he failed to finish the weekend’s win over Cronulla because of a “heartlage problem”, but later confirmed he had genuine concerns he would run out of time to take his place on the left wing.

As Latrell Mitchell declared he loved September and it was the “pressure cooker moments” that brought out the best in him, his good friend Johnston was just hoping to take his place at Accor Stadium.

Just who replaces Johnston will be the biggest talking point at Redfern this week with experienced winger Josh Mansour an option, as well as Jaxson Paulo, who received death threats after a horror night in his last outing against Penrith, two options.

There is also Richie Kennar, who scored a hat-trick on the left wing in his only game this year, while Michael Chee Kam can also play in the centres.

Coach Jason Demetriou could even get funky and opt for debutant Josiah Karapani, similar to the way the Sydney Roosters took a successful punt on Paul Momirovski whose second NRL game was a preliminary final in 2018. 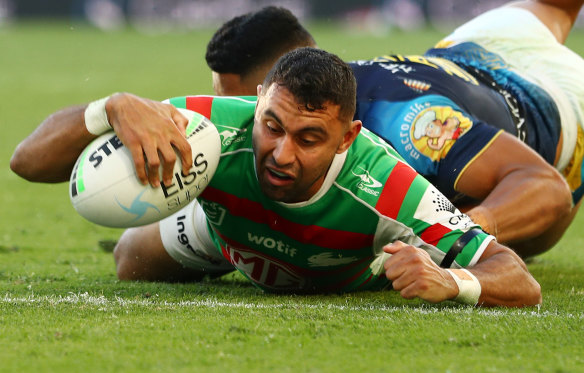 Rookie flyer Izack Thompson suffered a serious hamstring injury at training and is out for the year.

“I’ll do everything I can to get out there,” said Johnston, who this season has crossed for 30 tries for the second successive year.

“I don’t think you can needle it. It’s a muscle thing. I’ll rest, get physio and rest up.

“I knew when it happened it was a hip flexor. I stayed out there for a while to see if I could do my job, but it got to the point I thought it was best if I came off and someone could do the job better than me.

“I’m on so much pain medicine right now it’s ridiculous.

“It will be touch and go. I feel pretty confident the way it’s recovered from yesterday to today. If it [stays on that] trajectory, I’ll be right.”

Johnston backed Mansour or Paulo to do a great job, and quipped Mansour had even put his hand up to play in the forwards if Jai Arrow failed to play. Arrow is all but certain to take the field.

Meanwhile, headline act Mitchell was pumped for the grand final rematch after missing out on last year’s decider because of suspension.

“I love [the big games], definitely,” Mitchell said on Tuesday.

“Semi-final time is the best time every year and an opportunity to be who I want to be, to be the best version of me. I think that is what I look forward to.

“It is the pressure cooker moments I love, it’s what I thrive on. It is do-or-die as well. That is something to look forward to this week.

“Everyone is at home, [and if you] love or hate me, I just do what I do. I know even my worst enemies are watching the game. It is for me to put on a show and entertain.”

Julian Savea: Former All Blacks winger re-signs with Hurricanes for 2021