Collingwood's Travis Varcoe, who won two premierships with Geelong, has announced his retirement.

Varcoe, 32, played 230 games for both clubs and last played for the Pies in round 18 against Port Adelaide. 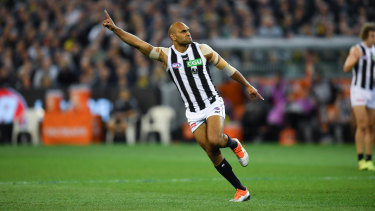 Travis Varcoe kicks a goal in the 2018 preliminary final.Credit:Joe Armao

"I don't have another season left in the tank. I leave feeling very fortunate and thankful for all that two wonderful clubs, Geelong and Collingwood, did for me and my family.

"I hope I was able to give something back to both of them in return for the support and care I received. As a footballer, you don't do it alone on or off the field." 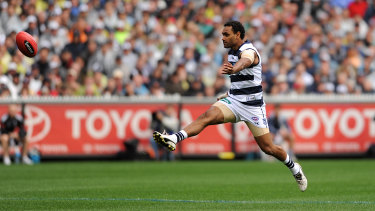 Pies head of football Geoff Walsh praised Varcoe and his family, wife Kim and their two daughters, Olivia and Franki, for their contribution to the club.

"At his best, Trav was a dynamic player who could hunt opponent or ball with real intent. He was what we needed when he joined us and he has never stopped being a solid member of the group," Walsh said.

"All of Collingwood thanks Trav, Kim and their family."

The equally tough-tackling and cleanly skilled Varcoe was key to Collingwood's 2018 run, playing in the qualifying final loss to West Coast days after his sister, Maggie, died following an accident on the footy field in South Australia.

He arrived at Collingwood for the 2015 season in a three way trade that also sent Heritier Lumumba to Melbourne and Mitch Clark to Geelong.

Varcoe played for the Indigenous All Stars in 2009 and for Australia in the International Rules series in 2010.